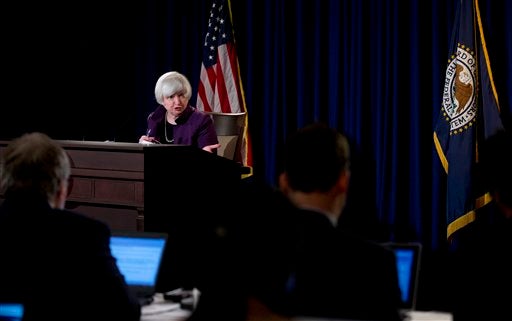 WASHINGTON— US employers added jobs at a solid pace in June, and the unemployment rate fell to 5.3 percent, a seven-year low. But wages failed to budge, and other barometers of the job market painted a mixed picture.

The economy gained 223,000 jobs last month, and the unemployment rate fell from 5.5 percent in May, the Labor Department said Thursday. But the rate fell mainly because many people out of work gave up on their job searches and were no longer counted as unemployed, which may reflect rising discouragement.

The result is that the proportion of Americans working or looking for work fell to a 38-year low. The government doesn’t count people as unemployed unless they’re actively searching for work.

The government also said employers added 60,000 fewer jobs in April and May combined than it had previously estimated.

The figures capture the persistently uneven nature of the job market’s recovery from the Great Recession. More people had begun looking for work in May, yet all those gains were reversed in June. And wages, which had shown signs of finally rising earlier this year, have now stalled. They have risen just 2 percent over the past 12 months, down from a 2.3 percent year-over-year gain in May.

The flat wage growth suggested that many employers may see no need to raise pay to attract or retain qualified workers and that there are more people available for work than the unemployment rate would otherwise indicate.

The sluggish pay gains also raise doubts about when the Federal Reserve will raise rates and end a stimulus effort that dates to 2008.

Most economists have been predicting that the Fed would most likely raise rates in September. But last month’s flat pay figure suggested to some that the Fed might delay that move.

“After this report, I think it would make sense to wait until December to start that slow rate increase,” said Tara Sinclair, chief economist at the jobs site Indeed and a professor at George Washington University.

A Fed rate hike would lead to higher rates for mortgages, auto loans and other borrowing.

Some quirks of the jobs report might also explain why wages stagnated last month. The government’s survey for the report ended relatively early in the month on June 12. As a result, it might have excluded some bi-monthly paychecks and arbitrarily reduced earnings, noted John Silvia, chief economist at Wells Fargo.

One sour note in the report was that construction companies failed to add any jobs in June after hiring 15,000 in May and 30,000 in April. Manufacturing gained just 4,000 jobs in June. But health care added 53,000 positions and retailers 33,000.

Still, over the past three months, hiring has averaged 221,000, a step up from 195,000 in the first three months of the year. That shows that some employers are confident that consumer demand for their goods and services will remain strong enough in coming months to justify more staffers.

Their willingness to hire in anticipation of greater demand marks a shift from earlier in the economic recovery, when many businesses tended to hire only when essential.

A survey of purchasing executives at manufacturing firms released this week found that factories reported a scant rise in orders in June but ramped up hiring anyway.

“More people are traveling, because more people have disposable income,” Cimerola said. “And we believe that will continue.”

The company, which franchises 5,500 hotels in the U.S. under the Quality Suites, Comfort Inn and other brand names, wants to add 50 employees to its technology center in Phoenix. It is seeking Java developers and other programmers to build its mobile reservation system and hotel management software.

Strong hiring has endured this year despite a miserable winter, which helped cause the economy to contract 0.2 percent at an annual rate in the January-March quarter.

Yet Americans are finally spending more after boosting their savings earlier this year, in part because they’re growing more confident about the economy. The Conference Board said Tuesday that its consumer confidence index reached 101.4, matching March’s figure for the second-highest level since the recession.

That’s good news for auto dealers and real estate agents. Auto sales jumped to nearly a 10-year high in May. The National Automobile Dealers Association forecasts that sales will top 17 million this year for the first time since 2001.

And home sales are running at an eight-year high and boosting construction. Permits to build homes jumped 11.8 percent in May to the highest level since 2007.

Most economists now expect economic growth to reach an annual rate of 2.5 percent in the April-June quarter and 3 percent in the second half of the year.