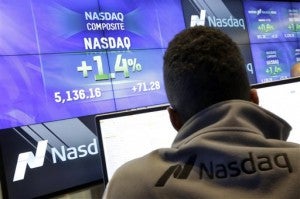 Screens by the Market Intelligence Desk show an intraday high for the Nasdaq Composite index, at the Nasdaq MarketSite, in New York, Thursday, June 18, 2015. US stocks notched their biggest gains in a week Thursday, pushing the Nasdaq composite index to an all-time high. AP PHOTO/RICHARD DREW

US stocks notched their biggest gains in a week Thursday, pushing the Nasdaq composite index to an all-time high.

The rally came a day after the Federal Reserve suggested that it wasn’t planning to raise interest rates right away. Ultra-low rates over the past six years have helped drive a bull market in stocks that has pushed the market to record levels.

The central bank said Wednesday that it needs to see more improvement in the economy and stronger signs of inflation before lifting rates, reassuring investors.

“The Fed’s likely to raise rates later this year, but maybe not as aggressively as some market participants worried,” said Michael Baele, managing director and senior portfolio manager at US Bank Private Client Reserve.

Most major US stock indexes are up for the year, but the Nasdaq is turning in the best performance. It’s up 8.4 percent, compared with a gain of 3 percent for the S&P 500 index and 1.6 percent for the Dow.

The Nasdaq’s rise has been driven by technology and health care. In a slow-growth world, investors are favoring stocks where earnings will be better than average. Faster-growing companies should also fare better should rates eventually rise, said Peter Cardillo, chief market economist at Rockwell Global Capital.

While the Nasdaq, which tracks 2,500-plus stocks, has been steadily climbing since 2011, its ascent isn’t the crazed surge that drove it to its dot-com bubble era highs in 2000. This time the gains are underpinned by solid companies said Stephen Freedman, senior investment strategist at UBS Wealth Management Americas.

The average price-earnings ratio of the Nasdaq, a measure of how much investors are willing to pay for every dollar of earnings the companies in the index generate, is currently 21. When the Nasdaq was at its highest, the ratio reached 194.

Drug developer BioMarin Pharmaceuticals and biotechnology company Radius Health were among the big gainers in the index on Thursday. Both companies reported positive news on treatments still in development.

Traders also got an indication that the economy was recovering from its weak start to the year.

An index designed to predict the future health of the economy posted a second straight strong increase in May, indicating the economy should gain strength in the second half of this year. Separately, weekly applications for unemployment benefits fell last week to a seasonally adjusted 267,000, near 15-year lows reached two months ago.

Despite the upbeat day, investors still haven’t forgotten about Greece.

The debt-stricken nation and its international lenders are deadlocked in bailout talks. Greece needs more loans from its creditors before June 30, when its current bailout program expires and a 1.6 billion euro ($1.8 billion) debt repayment is due. Greece and its creditors blame one another for an impasse in the talks. A default could result in Greece leaving the euro currency bloc, dealing a blow to the project.

Bonds edged lower, pushing the yield on the benchmark 10-year Treasury note up to 2.33 percent from 2.32 percent late Wednesday.

The price of oil rose Thursday as the dollar weakened, making oil more attractive to holders of foreign currencies. Benchmark U.S. crude rose 53 cents to close at $60.45 a barrel in New York. Brent crude, a benchmark for international oil used by many US refineries, rose 39 cents to close at $64.26 in London.

In other futures trading on the NYMEX: