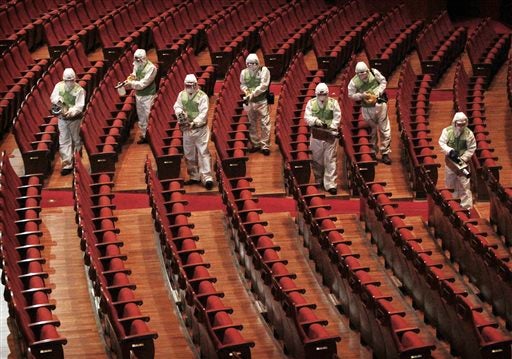 “The number of consumers who opt for online shopping in order to avoid outside activity has increased sharply since the end of May in the aftermath of MERS,” said Lee Wan-shin, marketing director at Lotte Department Store.

Data from the country’s supermarket chains showed that their online orders and sales surged by 50-60 percent on-year since Jun 1, when the country reported its first death from an outbreak of MERS.

Online sales of South Korea’s No. 1 discount store E-Mart have rocketed 63.1 percent from June 1-11, compared to the same period in 2014.

“Because of the impact of the MERS crisis, the online grocery shopping trend is spreading much faster than expected,” a Lotte Mart official said.

With the shift reverberating across the industry, supermarket chains are reinforcing their delivery services to handle the surge in volume.

“We will continuously increase manpower and equipment to meet growing demand from customers,” he said.

Lotte Mart added 150 employees for packaging and delivery service since the first week of June while adding 100 more delivery vehicles per day to its fleet.

E-Mart gave notice to its online customers about a possible delivery delay on its website, saying its cut-off time for next-day delivery might be made earlier due to the unprecedented surge in online demand.