Unemployment eased to 6.4% in April 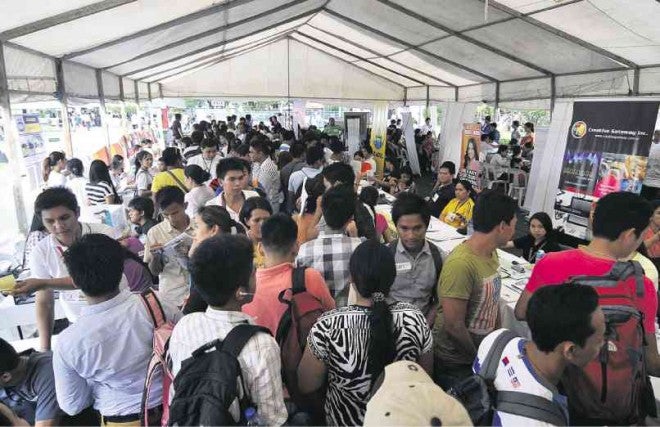 The number of Filipinos without jobs as well as those looking for additional work slightly went down in April, reflecting the creation of more jobs on the back of a still robust economy, the government said Tuesday.

The Philippine Statistics Authority’s (PSA) April 2015 Labor Force Survey (LFS) showed that the unemployment rate eased to 6.4 percent from 7 percent a year ago. According to the National Economic and Development Authority (Neda), 495,000 Filipino gained employment between April 2014 and April this year, bringing down to 2.7 million those who remain unemployed.

“The favorable market condition in April 2015 follows a similar trend in the January 2015 round of the LFS where unemployment and underemployment also declined,” Economic Planning Secretary and Neda Director General Arsenio M. Balisacan said in a statement.

“It is noteworthy that the improvement in the employment situation appears to be broad-based. Thirteen out of 17 regions, including the National Capital Region (NCR), exhibited a decline in unemployment during the survey period,” Balisacan added, even as NCR posted the highest regional unemployment rate at 9.3 percent last April.

The labor force population—which includes Filipinos who are 15 years old and above, whether employed or not—increased to 64.8 million as of April from 63.8 million in the same month last year. Labor force participation stood at 41.8 million last April, up from 41.6 million a year ago.

Neda said total employment increased by 1.3 percent in April, which translated to 495,000 more Filipinos who secured jobs within the year.

Last April’s LFS still did not cover Leyte province, the PSA said. “Due to a large number of households displaced in the province by Supertyphoon “Yolanda,” a new sampling frame for the province of Leyte has to be created for it to be included in the survey,” Neda explained.