Unemployment, underemployment rates down in April 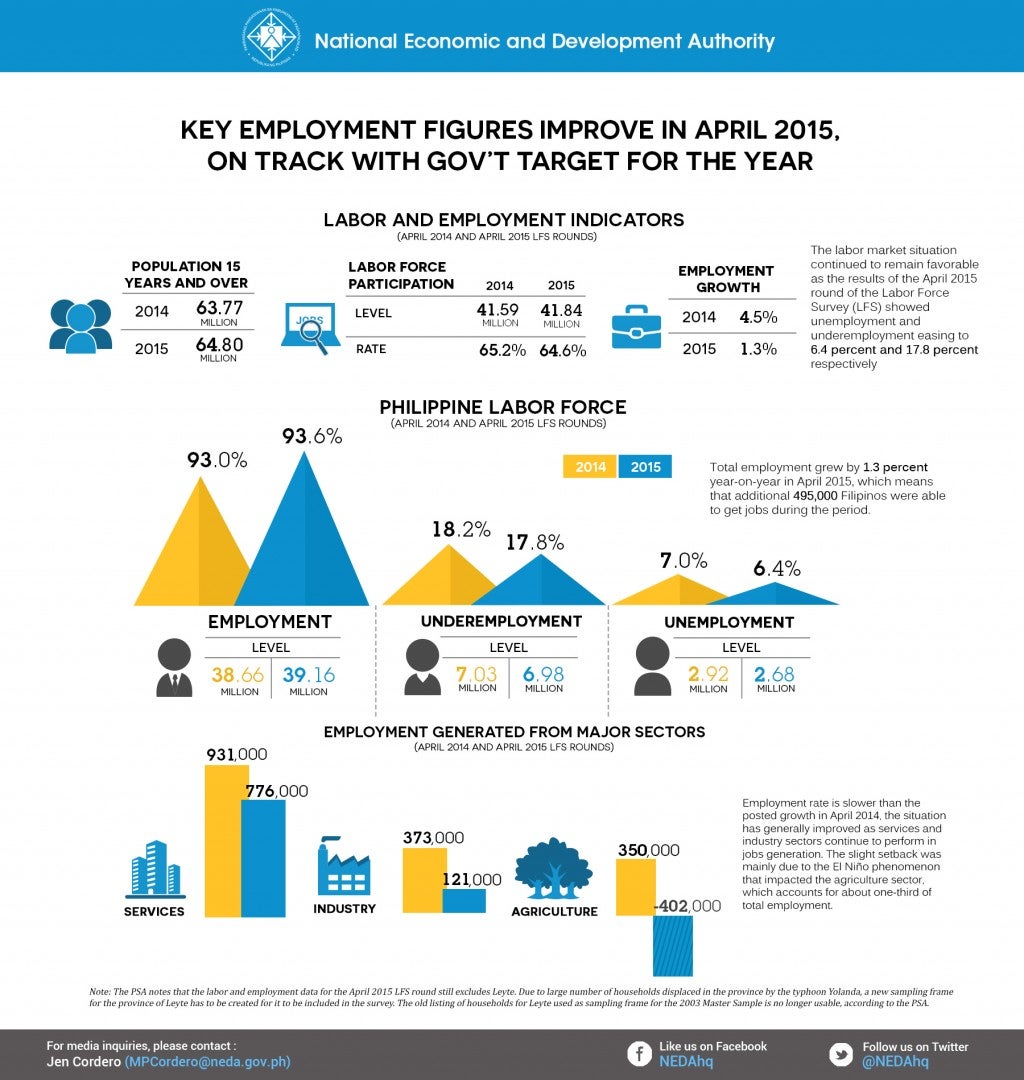 The number of Filipinos without jobs and those looking for additional work slightly went down in April, reflecting improvements in employment on the back of a still robust economy.

The Philippine Statistics Authority’s (PSA) April 2015 Labor Force Survey (LFS) showed that the unemployment rate eased to 6.4 percent from 7 percent a year ago.

According to the National Economic and Development Authority (Neda), 495,000 Filipino gained employment between April last year and April this year, bringing down the number of unemployed Filipinos to 2.7 million.

The underemployment rate also improved to 17.8 percent last April from 18.2 percent a year ago, which means 44,000 Filipinos found additional work in between the one-year period. This means the number of underemployed, defined as “employed persons who express the desire to have additional hours of work in their present job, or to have additional job, or to have a new job with longer working hours,” was reduced to seven million.

“The favorable market condition in April 2015 follows a similar trend in the January 2015 round of the LFS where unemployment and underemployment also declined,” Socioeconomic Planning Secretary and Neda Director-General Arsenio M. Balisacan noted in a statement.

“It is noteworthy that the improvement in the employment situation appears to be broad-based. Thirteen out of seventeen regions, including the National Capital Region (NCR), exhibited a decline in unemployment during the survey period,” Balisacan added, even as NCR posted the highest regional unemployment rate—at 9.3 percent—last April.

As for underemployment, Balisacan said “improvements were observed across all classes of workers, except for the self-employed without any paid employee, those who worked with pay in their own family-operated farms, and workers in government or government corporations.”

Also, Neda pointed out that “majority of the labor force who are employed in more remunerative and stable work increased by 1.9 percent, reaching 22.6 million in April 2015” to compose a slightly higher 57.8 percent of total workers.

Balisacan said the government is on-track to hitting, and even exceeding, its employment targets for this year.

The labor force population—which includes Filipinos who are 15 years old and above, whether employed or not—increased to 64.8 million as of April from 63.8 million in the same month last year. Labor force participation stood at 41.8 million last April, up from 41.6 million a year ago.

Neda said total employment increased by 1.3 percent in April, which translated into 495,000 more Filipinos who secured jobs within the year.

“While this period’s employment rate is slower than the posted growth in April 2014, the situation has generally improved as services and industry sectors continue to perform in jobs generation,” Balisacan said. Employment grew at a faster 4.5 percent in April last year.

Neda attributed the slower increase in total employment to the “slight setback” caused by the dry spell brought by the El Niño phenomenon, which badly hit the agriculture sector. Agriculture activities contribute about a third of total employment.

“To ensure that the gains in employment are sustained, the government must continue its interventions in the agriculture sector and pursue adequate infrastructure spending to boost economic growth and employment,” Balisacan said.

The Neda chief said there is a “need to implement disaster risk management strategies and other precautionary measures against drought, floods, and rain-induced landslides in hazard prone areas” in order to at least mitigate, if not prevent the negative effects of natural disasters on employment.

“To continue the gains, we need to speed-up the implementation of key reforms such as public infrastructure development, reducing investment restrictions, increasing competition, reducing the cost of doing business. If implemented, these can help lift the key constraints to sustained, job-generating growth,” Balisacan added.

Last April’s LFS still did not cover Leyte province, the PSA said. “Due to large number of households displaced in the province by typhoon ‘Yolanda,’ a new sampling frame for the province of Leyte has to be created for it to be included in the survey. The old listing of households for Leyte used as sampling frame for the 2003 master sample is no longer usable,” Neda explained. KS