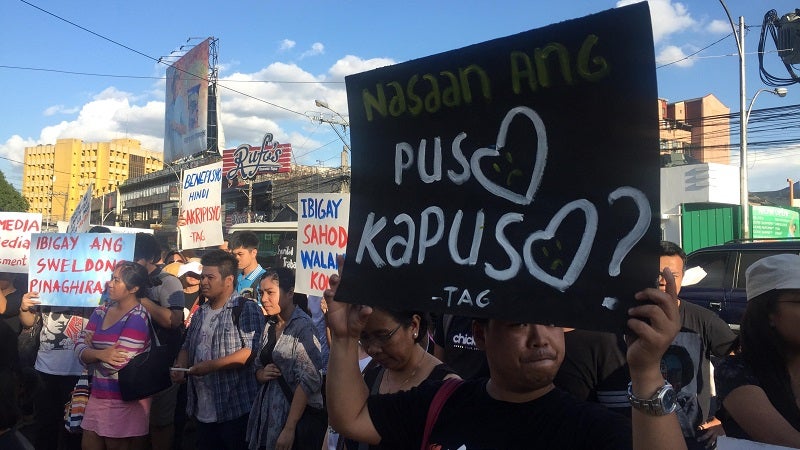 Members of the Talents Association of GMA-7 (TAG) stage a rally infront of the network’s station in Quezon City to protest various labor issues. Photo by NESTOR CORRALES/INQUIRER.net

Calling to end contractualization in media and in the labor force, members of the Talent Association of GMA-7 (TAG) staged a rally on Friday afternoon at the network’s main station in Quezon City.

In 2014, several members of TAG were laid off from the company.

TAG claimed that GMA-7 has denied them of a regularization status despite the long years of working for the network.

This prompted the TAG to file charges against GMA-7 before the National Labor Relations Commission (NLRC) in 2014.

During the rally, the group launched the Media Labor Association and Assistance Center (MLAC), which is a labor center that would address issues of harassment and contractualization of media workers.

In April this year, around 200 employees of the network were affected by a mass layoff following the closure of some of its regional stations.

GMA-7, in a statement said, it “fully respects the right of the members of TAG to peaceful public assembly.”

The network said there is now a case pending before the NLRC filed by the TAG members.

“In adherence to legal process, GMA Network is ready and willing to respond to their issues in the proper forum,” it said.