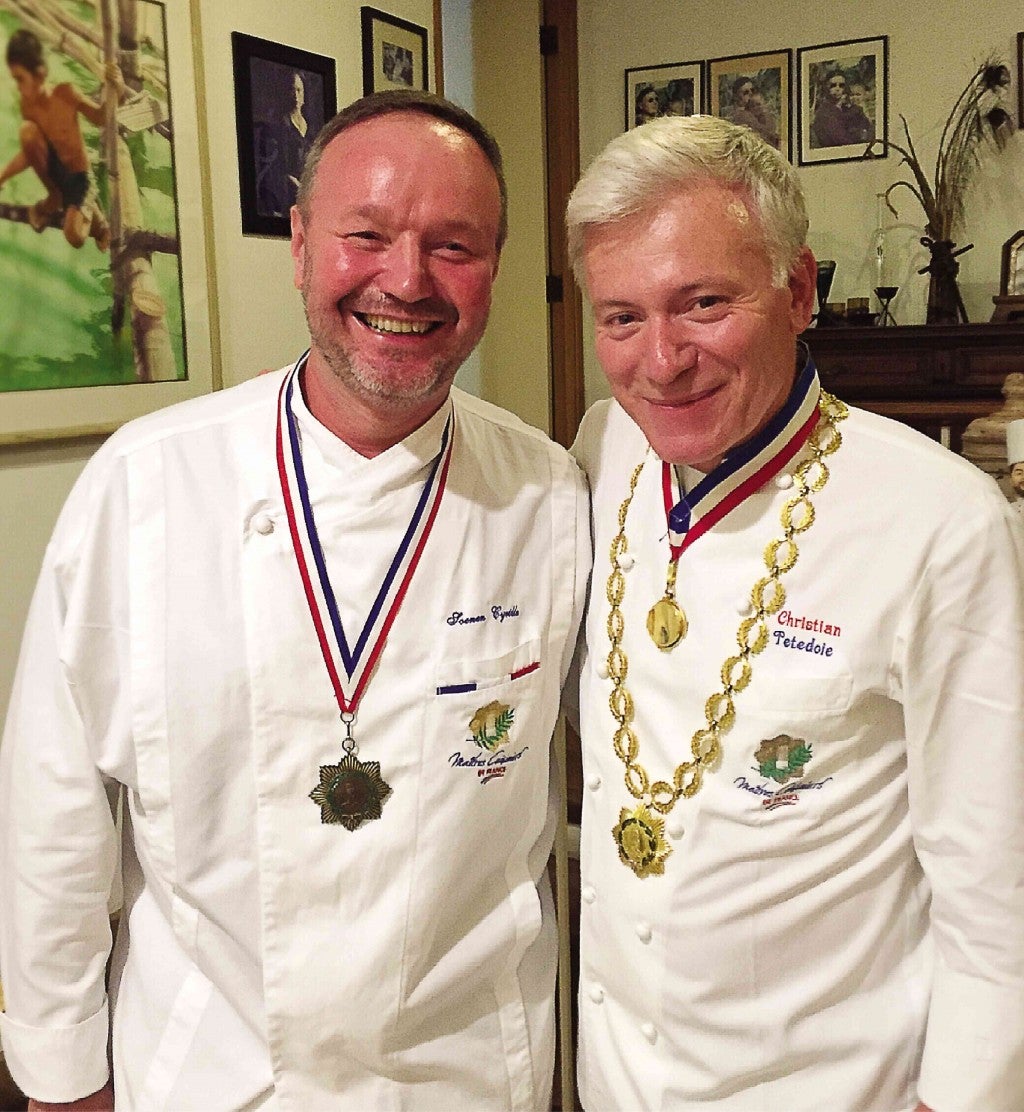 Television has made us aware of the term “Master Chef,” as popularized by the cooking competition franchised globally with judges and hosts such as English chef Gordon Ramsay. But for the French, the title of Master Chef is not bestowed on one who just bagged a televised cooking competition. It’s a much harder title to attain.

In France, the Maitres Cuisiniers de France, or Master Chef of France, is one of the highest honors a chef can get. In fact, the legendary Alain Ducasse, in spite of his record of having three Michelin stars in three cities, only received his medal as Master Chef of France this year.

Here’s good news: There is a Philippine-based chef who joined Ducasse in this year’s ceremonies, receiving the coveted title of Master Chef. You might be familiar with him: Chef Cyrille Soenen of Impressions Restaurant in Resorts World.

Soenen first made waves in the Philippines as executive chef of Prince Albert at the Hotel Intercontinental, with his to-die-for steaks. Later he opened his own eponymous restaurant Cicou (his nickname) at a boutique hotel in Makati. A few years later, Cicou was revamped to become a more relaxed affair featuring Southern French comfort food, moving to Annapolis Street in Greenhills. Soenen himself moved on to become Executive Chef of Impressions.

Soenen, to my mind, is the best French chef in Manila: First, because his heart, as expressed on the plates he creates, is truly French and the pizzazz of French cooking is just authentically there; second, because of his apparent mastery of technique, albeit in the classical sense; third and most of all, because of his consistency.

In 2012, to highlight the importance of French cuisine to his Philippine audience, while showcasing the thriving Philippine culinary industry to a prestigious group of French chefs, Soenen invited Chef Christian Tetedoie to the Philippines.

Tetedoie is one of the most respected chefs in France. He is now a sage, or leader, of the Bocuse d’Or, one of the most prestigious (if not the most prestigious) gastronomy contests in the world. It was founded in 1987 by Paul Bocuse, a pioneer of French nouvelle cuisine, with the aim of bringing together select chefs from all over the world, and having them execute superb dishes within 5 hours and 35 minutes, live before an audience.

Just to show you how competitive it gets: the United States, with French Laundry’s Thomas Keller on their team, only won the Silver Medal last February. But this in itself is a great feat.

Today, the competition spans continents, with preselection events in Europe, Latin America and Asia. I attended the Bocuse d’Or last February in Lyon and was surprised to find chefs cheering, blowing trumpets, singing national cheers—it feels like the World Cup, except the participants are the best chefs from around the world.

Tetedoie is not only a sage of Bocuse d’Or, he is also president of the prestigious Maitres Cuisiniers des France (Master Chefs of France).

Over dinner at the home of Soenen when he visited the Philippines this May, Teteoide shared: “As president, it has become my mission to help chefs, especially French chefs outside of France who are members of MCF.”

The first obligation of MCF, he explained, is to share knowledge on French cuisine and culinary techniques.

Being a chef is not as simple as knowing how to cook, Tetedoie said. “It is already difficult to learn the techniques on how to cut fish, how to properly handle meats, how to make exquisite desserts. And then there is the business side, that one must also be good at.”

Neither is it something you learn the easy way, as some kids nowadays think. You don’t call yourself a chef just because you have a degree from some hoity-toity culinary school. Tetedoie himself slaved in French kitchens since the age of 14, working so hard that he earned the title of best apprentice in France, later cooking for no less than French President Francois Mitterand.

In spite of his sparkling resume, though, including working with Paul Bocuse himself, the premiere chef takes his passion for all things culinary a step further, constantly looking for ways to improve French cooking techniques, going so far as inventing the Cookal, a kind of alcohol that takes advantage of high heat, but which extinguishes without smoke. It allows pastry chefs to prep hundreds of creme brulee at a time without sacrificing quality.

It was not Tetedoie’s first time in the Philippines. He was guest chef of Soenen at Brasserie Cicou in 2012, with Chef Eric Hubert, also from Lyon. Tetedoie served the best of Lyonnaise cooking.

Tetedoie is now back in Lyon so we unfortunately won’t get to taste his cooking (at least until he agrees to come back). No worries, we have our very own Master Chef of France right here in the Philippines in the person of Cicou.

If you want French haute cuisine, or oysters especially flown in from France, head over to Impressions at Resorts World. It’s worth blowing your expense account on this restaurant because management allows Soenen to shop for the best ingredients. Call ahead, though, and make sure he is in the kitchen, as he also likes to travel.

If you want French home cooking, there is Brasserie Cicou in Greenhills. Head chef duties are now with Chef Jill Osias, but a meal here feels like a visit to Mussidan, Soenen’s hometown near Bordeaux, with French stews and coq au vin.

There is still a big difference between TV-proclaimed master chefs and the real deal. We are lucky to have a real French Master Chef in Manila.