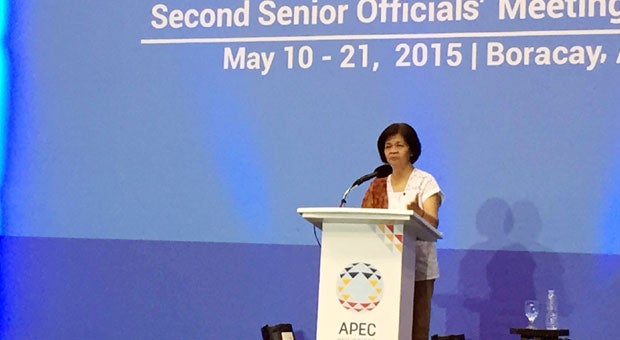 BORACAY, Aklan – A senior official of the Asia Pacific Economic Cooperation (Apec) on Tuesday noted the paradigm shift in labor system which is veering away from the assembly line of work and is heading towards knowledge-based services in the manufacturing sector.

In a press briefing before reporters, Ambassador Laura Del Rosario attributed the shift to the overabundance of services needed for the manufacture of a product. She cited the production of a car, which is now built by machines operated by laborers when earlier it was produced in an assembly line.

“We’re moving manufacturing and services. We’re just not looking at people working in an assembly line… We’re thinking of people doing services for a high-product. We have to change our paradigm. This is how the new economy looks like. It is knowledge-based and service-based economy…” said Del Rosario, also a Foreign Affairs Undersecretary for international economic relations.

Also chairing the Senior Officials Meeting for Apec, Del Rosario said the manufacture of a product produces 37 to 77 forms of service jobs. She said in the situation of a car manufacturing, workers do a variety of services such as painting, welding, advertising, sales, among others.

“When you sell a car, it’s not just producing a car inside the factory from beginning to end. If a product is produced and you go to manufacturing, you cannot get to the manufacturing itself of the product. You go to various services that go into manufacturing the product,” Del Rosario said.

This diversity in services for each manufactured product thus increases job opportunities, Del Rosario said, adding that the paradigm shift has resulted in an inseparable service and manufacture sector that now go hand in hand.

“Manufacturing and services are naturally bound together and therefore we cannot separate them anymore from flesh to bone,” Del Rosario said.

“There are some jobs that are becoming obsolete. At the same time, there are now jobs that are emerging. One study said of the 10 highly manned jobs in 2010, six did not exist in 2004.  Can you imagine that? Sixty percent of jobs, which are high in demand in 2010, did not exist five years before. You can just imagine now what new jobs are being demanded,” she added.

Del Rosario said the promotion of services is in line with the administration’s inclusive growth agenda.

“Our agenda this year is the promotion of services as a means for inclusive growth. We know services provide an area for SMEs and micro enterprises to get involved and we also know services are necessary for any activity related to manufacturing,” Del Rosario said.

Asked how the growth in the services sector could trickle down to the ordinary people, Del Rosario said the trickle down model is no longer relevant.

She instead cited the social enterprises activity initiative, which allows the common people to benefit from the corporate scheme by encouraging corporations to deal with the ordinary “masses,” such as by purchasing the products of farmers.

“It’s not trickle down anymore. How can we trickle down something big corporations do? It’s to source from them whatever you need. That for me is inclusion… We’ll go straight upward and hopefully we’ll go from the bottom up,” Del Rosario said.

The Philippines is hosting this year’s Apec, a delegation of 21 member economies. The country hosted Apec ahead of the Asean integration in 2015. It hosted the Apec leaders meeting for the first time in 1996.

The country will host on Wednesday the second leg of the Senior Officials’ Meeting and Related Meetings here, also as a way to promote the island as a premier summer destination among Apec member economies. AC