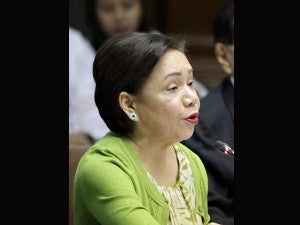 Senator Cynthia Villar has filed a bill that will declare certain acts of agricultural smuggling as economic sabotage.

Villar said Senate Bill 2765 or the Anti-Agricultural Smuggling Act of 2015 seeks to penalize with a fine of equal to twice the fair value of the smuggled articles and imprisonment of six to 12 years the smuggling of any agricultural commodity or product, whether plant-based, animal-based, raw or processed, including any commodity or product derived from livestock that is available for human or livestock consumption.

“By definition, this includes fish, forestry, seeds, poultry and dairy products that have undergone various degrees of processing,” Villar, head of the Senate committee on agriculture and food, said in a statement on Tuesday.

Under the bill, the senator said, the modus operandi of traders who use cooperatives to smuggle goods into the country will be considered an act of economic sabotage.

“We don’t want smugglers to get away with a mere slap on the wrist. Smuggling is a crime that not only affects the consumers, it also threatens the livelihood of farmers and fisher folks,” she said.

Also under the bill, the smuggling of any agricultural commodity will be punishable by a fine equal to the aggregate amount of the taxes, duties and other charges avoided; confiscation of smuggled articles; cancellation and revocation of business license, import permits, and other pertinent documents for importation; and perpetual disqualification to import agricultural products.

“Any person who shall import or bring into the Philippines agricultural products without the required import permit from the implementing agency, or any person who shall import agricultural products by means of fraud or by illegally obtaining the required import permit shall be guilty of the crime of smuggling, including those acts which are within the purview of technical smuggling,” the bill said.

The proposed measure also provides that when the offender is a juridical person, criminal liability should attach to its president, chief operating officer or manager. In addition, the business permit or licenses of the business entity shall be revoked or canceled.

The following, under the bill, will also be considered as principals to the crime of economic sabotage: