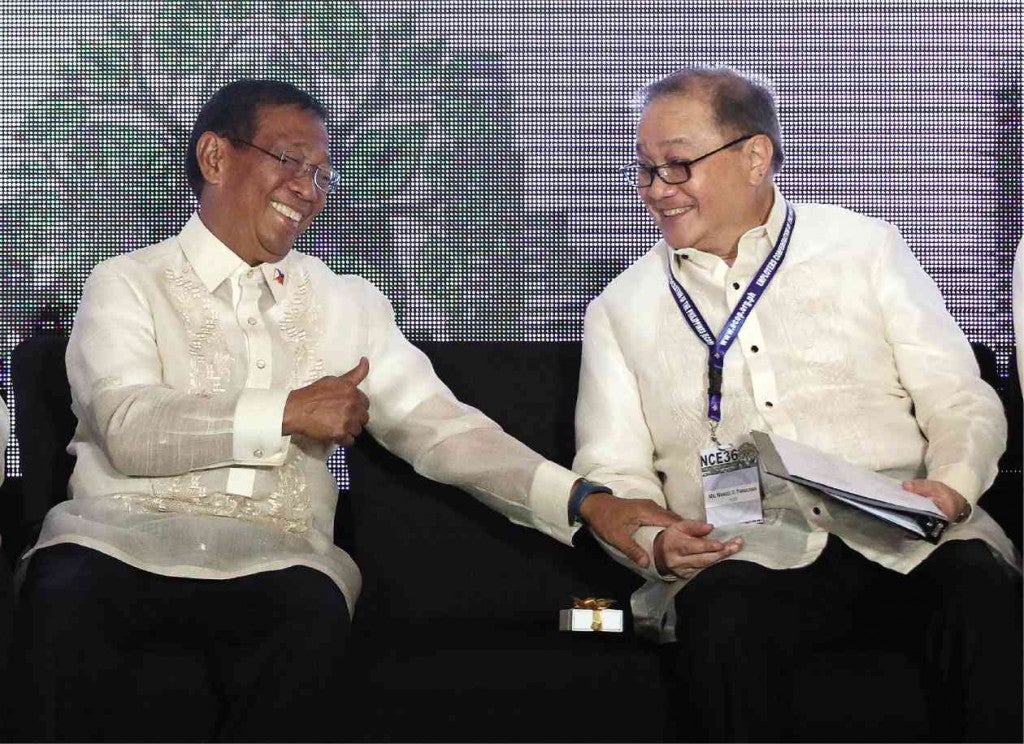 THUMBS UP Binay in high spirits and victory mode as he talks with business tycoon Manuel V. Pangilinan at the 36th National Conference of Employers in Pasay City on Friday. MARIANNE BERMUDEZ

Vice President Jejomar Binay on Friday claimed that the freezing of his bank accounts by the Court of Appeals has a “chilling effect” on the country’s business community.

Speaking at the 36th National Conference of Employers attended by top businessmen, including telecommunications tycoon Manuel V. Pangilinan, Binay criticized the Anti-Money Laundering Council (AMLC) for making a “false and one-sided report” that prompted the Court of Appeals to order the freezing of 242 bank accounts allegedly owned by him, members of his family, his friends and his alleged dummies.

“Let us all hope this whimsical use of regulatory powers is stopped sooner than later. It creates a chilling effect on confidence in business and the banking system that is detrimental to our economy and development,” Binay said.

Jesting, Binay said he hoped no one among the participants in the conference would be invited to the Senate blue ribbon subcommittee inquiry into allegations of corruption against him for being called his friends.

Binay told reporters on the sidelines of the conference that the scandal would not change his mind about running for President in next year’s elections.

“I started it, I will finish it,” Binay said.

“The accusations and the insults they are throwing at me—all these are no reason for me to back out of the race. The fight is on,” he said.

Binay said he was aware, through newspaper reports, that President Benigno Aquino III had been talking to Sen. Grace Poe about the 2016 elections, but made no comment about the possibility that Poe, who is rated second to him in the polls, may run for President.

He also refused to comment on the possibility that Manila Mayor Joseph Estrada will endorse Poe, who is the daughter of the late movie actor Fernando Poe Jr., a bosom buddy of the former President of the Philippines.

“It’s like you want [a face-off between me and Mayor Estrada]. It’s still speculation,” Binay said.

One speaker at the conference held at Marriott Hotel in Pasay City jokingly called Binay “President,” eliciting laughter from Binay himself and the audience.

When it was his turn to speak, Binay warned the businessman that he should now be answerable to the AMLC.

“Now that I have referred to you as dear friends, I hope you will not get an instant invitation from the Senate blue ribbon subcommittee to prove you are not my dummies, and your companies, not my dummy corporations,” Binay said in his speech.

“It is also my prayer [that] your bank accounts will not be subjected by [the] AMLC to a freeze order solely on the basis of our friendship and association, or the fact that you are in the same room as Jojo Binay,” he added.

The AMLC is an independent government agency established to combat money laundering and help preserve the integrity of the Philippine financial system.

Cases filed by the council are the results of its investigation carried out in accordance with the antimoney laundering law passed in 2001 to remove the Philippines from an international blacklist of safe havens for financial criminals.

The Vice President lamented the Court of Appeals order, saying the court and the AMLC are being used to persecute people associated with him.

“Such is the sad fate of some honest and hardworking businesspersons I know. They were publicly ridiculed, intimidated and harassed, and their bank accounts now frozen simply because they happened to be my friends,” he said.

Binay said he was not surprised that the report on the AMLC investigation of his bank accounts was leaked to other parties even as he himself had not yet received a copy.

“I will no longer tell you how they were able to get the report, which according to the law is confidential. I know the reason why they released this report,” Binay said.

The Inquirer ran a series of stories on the AMLC report despite the threat of prosecution from Binay’s camp.

Law experts said the media cannot be prosecuted as the freedom of the press guaranteeed by the Constitution must prevail over the antimoney laundering law provision on confidentiality.

Binay insisted that the AMLC’s report was one-sided, as it did not include his response to the findings.

“We were not given the chance to explain our side. I will repeat what I said yesterday: [The] AMLC is wrong, totally wrong,” Binay said.

He laughed off the claim in the report that he owns the 242 bank accounts that the Court of Appeals ordered frozen on May 11.

“If it’s true, [then] I have outdone Bill Gates and Warren Buffet. I didn’t know we have that many banks,” he said.

In his talk with reporters, Binay called the accusations against him a “game of exaggeration.”

“I remember last time Sen. Nancy (Binay) was accused of the exaggerated price of the [birthday cakes for senior residents of Makati City]. Then it went on to land in Batangas with [the] exaggerated size of [350 hectares]. Now these 242 bank accounts. It’s unbelievable,” Binay said.

Earlier, Binay said he had only five bank accounts, not 242.

‘I save even coins’

He clarified that the funds in his bank accounts came from his income, savings and investments before he went into government service, as well as from donations to his vice presidential campaign in 2010.

“My salaries from serving in the government are not hidden wealth. The salaries and savings of my wife from practicing medicine are not hidden wealth,” Binay said, adding that he also earned money from his law practice and job as professor, and from business ventures that he launched in the 1980s.

He said he was saving. “I save even change,” he said.

Binay said the campaign contributions he received were duly reported to the Commission on Elections.

“I remain hopeful that our business sector remain resilient to the oppressive heat of politics and remain focused on the bigger tasks ahead,” he added.