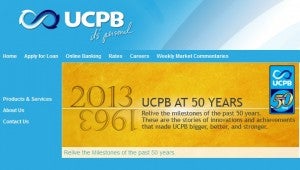 The government’s Privatization Council on Tuesday approved the sale of its majority stake in United Coconut Planters Bank (UCPB) as well as the lender’s capitalization.

Finance Undersecretary Gil S. Beltran told reporters on Tuesday night after the council’s meeting that the Privatization and Management Office aims to dispose the government shares in UCPB by September. “Starting today, the privatization of UCPB will be set into motion,” he said.

Beltran, who is the acting chair of the Privatization Council, said the government will sell its 73.9-percent share in the lender while requiring a minimum bid entailing recapitalization of UCPB worth P15 billion.

READ: Gov’t set to bid out stake in UCPB

The Finance official also said the government is proceeding with the auction of the “Payanig sa Pasig” property despite the legal challenges posed by claimants to the 18.5-hectare land.