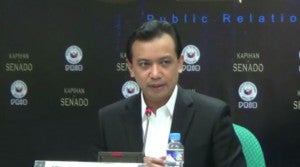 The senator said the chairman of Prosperidad was former congressman Rodolfo Plaza, a known political ally of Binay, while its president, Shirley Plaza is the current consultant of the Vice President for security issues.

Among the listed incorporators of Major Holmes, he said, was Mario Oreta and Gilberto Garcia, whose have been linked with Binay in the ongoing investigation into the alleged anomalies committed by the past and incumbent officials of Makati City. Binay was the city mayor before he was elected vice president.

Trillanes said Oreta was also the top campaign donor of Senator Nancy Binay when she got elected in 2013.

An incorporator of Bumbaran was former Quezon City Mayor Brigido Simon, whom the senator identified as Binay’s campaign coordinator in Mindanao when the Vice President ran and won in 2010 while the chair of Astra was Nora Bitong, who, he said, was top executive of Jaka Group of companies owned by the family of detained Senator Juan Ponce Enrile.

But Darlene Berberabe, president and chief executive officer, of Home Development Mutual Fund (Pag-Ibig), who was present in the hearing, confirmed the loan agreements with some of the companies mentioned by the senator but said they were among those that were already “flagged off” by the agency.

In January this year, the senator claimed  that Binay, who is concurrent chairman of Housing and Urban Development Coordinating Council (HUDCC), formed  a partnership  with “favored”  contractors so he could receive half of the profits, and not only commissions, from housing  projects.

At the start of Trillanes’ presentation, Berberabe wanted to clarify immediately they had already flagged off the loan agreement with Prosperidad but he was cut off by the senator.

“After the fact, kung hindi pa ako nagreklamo saka mo sasabihin (if I didn’t complain only then you’ll say it)…You’ve been sitting there the past five hearings. You’ve not mentioned any red flags. Now you’re already anticipating this presentation kaya ka ngayon nagsasalita (that’s why only now you’re talking). You just sit there Attorney Berberabe. You wait please,” Trillanes added.