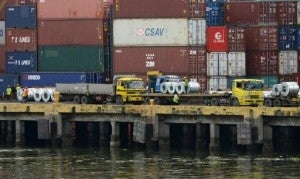 RTC Judge Bernelito Fernandez issued a 20-day temporary restraining order (TRO) favoring businessman Reghis Romero II’s and barring the young Romero and his HCPHI from performing any and all acts using, directly or indirectly the deeds of assignment dated March 2, 2011.

The elder Romero and two of his companies, R-II Builders Inc. and R-II Holdings Inc., had sought to nullify the allegedly spurious deeds of assignment which made it appear that they relinquished majority shareholdings and control of Harbor Center Port Terminal Inc. (HCPTI) to HCPHI.

The court found the elder Romero’s plea for TRO “meritorious” and dismissed Mikee’s camp motion to dismiss the suit. A hearing for the issuance of a writ of preliminary injunction was set for May 19.

“It appears that the plaintiffs (Reghis’ camp) are the lawful owners of the shares of stocks in [HCPTI]; that defendants’ (Mikee’s camp’s) actions based on the assailed deeds of assignment may cause injury to plaintiffs,” the court said.

The elder Romero’s camp earlier claimed that they discovered sometime in October 2014 that Mikee was allegedly misrepresenting himself to transfer the HCPTI shares to another company.

The March 2, 2011, deeds of assignment were declared nonexistent by elder Romero and dubbed it as spurious and a forgery. He also said the one who crafted the deeds was now being sued before the Manila City Prosecutor’s Office for falsification.

“HCPTI’s stock and transfer book shows no record of such deeds of assignment, or any transfer of shares of stock to HCPHI for that matter,” the elder Romero said.