Stocks head higher, bouncing back from a drop the day before | Inquirer Business
Close
menu
search

Stocks head higher, bouncing back from a drop the day before 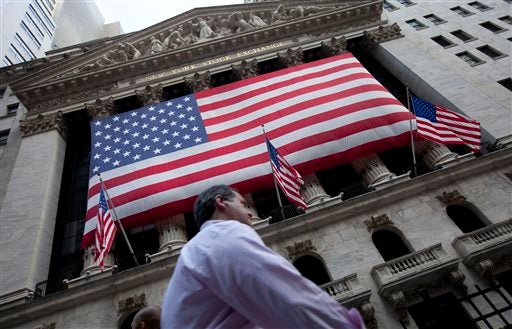 In this Monday, Aug. 8, 2011, file photo, a pedestrian walks past the New York Stock Exchange in New York. U.S. stocks headed higher in early trading, Friday, May 1, 2015, as the market bounces back from a steep decline the day before. Most Asian and European markets are closed for May 1, known as Labour Day in most of the world. AP

NEW YORK — US stocks headed higher Friday as the market bounced back from a steep loss the day before. Most Asian and European markets are closed for a holiday.

TRADERS TRADING: “It’s an odd day in the markets,” said Jack Ablin, chief investment officer at BMO Private Bank. The economic news out Friday was mostly disappointing, he said, yet traders pushed up major indexes at the end of a rough week. The S&P 500 is on track for a 1 percent weekly loss, the Nasdaq for a 2.4 percent loss.

MIXED: Spending on construction fell in March, the government reported Friday, a result of a drop in new home building and government projects. Another report said optimism about the job market last month lifted U.S. consumer sentiment to its second-highest level since 2007.

MISSED CONNECTION: LinkedIn plunged 21 percent after the online networking service gave a disappointing forecast for earnings in the months ahead, hurt largely part by its pending purchase of Lynda.com, an online learning company. The $1.5 billion deal announced earlier this month is LinkedIn’s largest. The company’s stock sank $46.76 to $205.12.

SO FAR: Roughly a third of all the companies in the S&P 500 reported first-quarter results this week, and the news was mixed. Falling oil prices and a rising dollar hammered many of them. Analysts expect companies in the S&P 500 will say overall earnings inched up 0.6 percent compared with the same period of last year, according to S&P Capital IQ, a provider of financial information. But revenue is expected to drop 1.4 percent.

BAD NEWS, FOR SOME: Ablin said that investors are wrestling with a slew of diverging trends. Recent economic reports have raised concerns about the economy’s strength. The U.S. economy nearly stopped growing in the January-March quarter, the government reported Wednesday. To some investors that’s not such bad news: Weak economic growth could lead the Federal Reserve to postpone its plans to raise a key borrowing rate. Record low interest rates have helped the stock market soar since the financial crisis.

“Economic data has recently been disappointing,” Ablin said, “but that keeps the Fed offstage.”

EUROPE: The only major market open for trading was in the UK, where the FTSE 100 inched up 0.4 percent.

JAPAN: Japan’s inflation rate edged up in March and unemployment eased slightly, according to data released Friday, offering glimmers of promise for the world’s No. 3 economy as it struggles to get its economy back on track after years of stagnation. The central bank kept its ultra-loose monetary policy unchanged in a policy meeting Thursday.

CRUDE: Benchmark US crude oil sank 91 cents to $58.72 a barrel on the New York Mercantile Exchange.