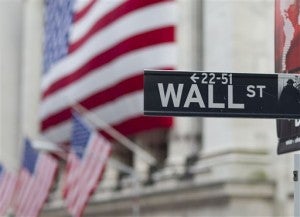 The market recovered after an early downturn that followed an unexpected and sharp fall in the April consumer confidence index from the Conference Board.

Twitter shares plunged 18.2 percent in the final hour of trade as its first-quarter revenue of $436 million came in well below the expected $456 million. Its net loss increased 22.7 percent from a year ago to $162.4 million.

Twitter called the early release of the results, about half hour before the markets closed instead of their scheduled release after the close, a “leak” but it was not clear whether the company itself, or someone else, was the source.

“We asked the NYSE to halt trading once we discovered our Q1 earnings numbers had leaked, and published our results as soon as possible,” Twitter said.

“We are investigating the source of the leak.”

“If Apple has anything truly working against it, we’d have to say it is the high expectations the company faces that are starting to rub up against the law of large numbers,” he said.

Merck though held up the Dow with a 5.0 percent gain, impressing investors as sales and profits in the first quarter, though lower than a year ago, beat analyst expectations. Adjusted earnings per share came in at 85 cents, 11 cents above forecasts.

The company raised its full-year adjusted earnings per share forecast to $3.35-$3.48, slightly better than the previous guidance.