Lesson from Arleen Chipongian-Perez: Faith in action amid 5-year battle for life 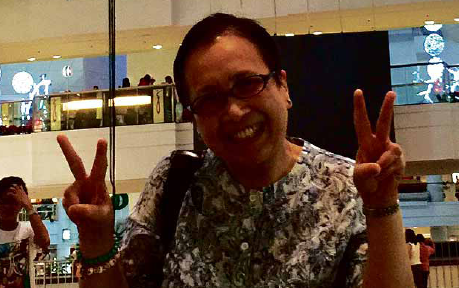 Arleen Chipongian-Perez battled cancer for five years, and lost the fight. But her story of faith and fortitude continues to provide lessons for everyone.

The business writer/editor, a native of Nagcarlan, Laguna province, started her journalism career in Manila in the early 1980s. She was assistant business editor at the Philippine Daily Inquirer for about three years before she moved to Hong Kong in 1997, where she lived with husband Bien until her death on April 12. She was 54.

Chipongian-Perez was diagnosed with ovarian cancer in 2010. She took the painful news in stride and decided she would fight her stage 3 cancer with chemotherapy. She was not without fear but her faith kept her strong.

“I know that the will of God will not take me to a place where the grace of God will not protect me, so I will get through this, especially with your support and prayers!” she wrote friends in Manila.

The five-month treatment bore encouraging results. Tests showed an improvement in her health; her hair slowly reappeared, and the head scarf she used to wear was quickly put aside.

She started doing light exercises at the gym and attended a healing Mass regularly. She also resumed her work routine and began traveling again.

Sometime in 2011, Chipongian-Perez felt fit and strong enough to engage in her favorite sport: Tennis. She played with the Philippine team in a Hong Kong tournament and was disappointed when the team won only one of four games. But she soon came around and realized that just being able to play again was enough of a blessing.

“It’s a matter of perspective. Compared to where I was last year, I feel blessed. Being able to play was a bonus,” she told friends.

Chipongian-Perez led a normal life despite occasional bouts with pain and fear, and continuing medication. She made regular trips to Manila to visit her siblings and friends, and to organize events for The Asset, a financial magazine where she was deputy editor.

There was no letup in her prayers. She prayed for courage on all fronts—physical, spiritual, emotional—and remained hopeful she would one day be totally cleared of cancer.

But hope turned to horror in December 2012, after tests showed that her cancer had recurred. In an e-mail to friends, she wrote: “Of course I am very sad, but as soon as I am done crying, I will definitely give this a good kick-ass fight!”
Naturopathy

She braced herself for another cycle of chemotherapy, which had once seen her health improve before it plateaued, and worsened. On the second half of 2013, doctors told her they would use another drug to treat her. Ever an optimist, she told friends that she believed prayers would trump the results of her medical tests.

The prognosis was dire in the last few months. The malignant cells had spread to her liver, affecting her respiratory system.

But she remained a fighter till the end and was grateful for both small and major improvements in her condition, constantly giving family and friends an update, and asking for prayers.

She wrote: “The power of prayer lies not in the asking but in the belief that what you ask for will be granted. That is hope.”

Faith in action was what Chipongian-Perez demonstrated throughout her five-year battle with cancer. Friends will remember her for her fortitude and her ability to remain positive and cheerful despite her predicament.

She will also be remembered for her professional achievements, including being named Journalist of the Year in 1991 by Mitsubishi and the Press Foundation of Asia.

Before her stint at the Inquirer, Chipongian-Perez was a business reporter at the Manila Chronicle. Previous to that she was with the business staff of the Daily Express and later, the Metro Manila Times.

Chipongian-Perez also cofounded the Economic Journalists Association of the Philippines in 1985.