France OK to refund Russia if warship not delivered 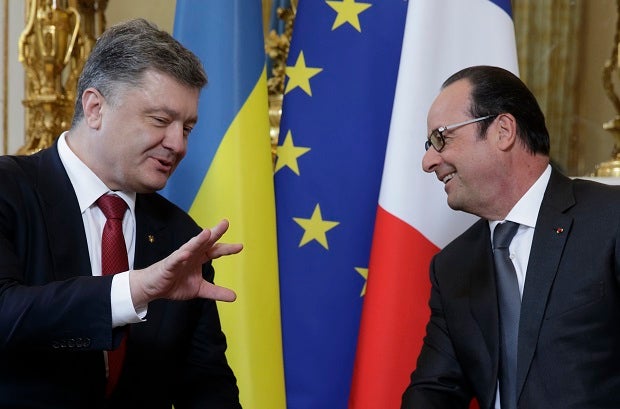 PARIS, France — French President Francois Hollande has acknowledged for the first time that France will have to give Russia a refund if it doesn’t receive the Mistral-class warship whose delivery has been suspended last year because of the conflict in Ukraine.

“If you don’t deliver, you must refund. So far, the delivery of the Mistral is not possible,” Hollande said at a press conference Wednesday with Ukrainian counterpart Petro Poroshenko.

A top French diplomatic official told journalists, including an AP reporter, that France has started negotiating refund payments in order to avoid paying financial penalties in case the deal is not fulfilled. He spoke anonymously because he was not authorized to disclose details of the negotiations with Russia.

Hollande said the issue will be on the agenda of his meeting with Putin on Friday in Armenia, where they will attend commemorations of the centenary of mass killing of Armenians by Ottoman Turks in 1915.

The Mistral-class helicopter carrier was part of a 1.2 billion euros ($1.28 billion) deal that was supposed to be the biggest arms sale ever by a NATO country to Russia.

France suspended the delivery “until further notice” last year, but Russia has already paid a substantial part of the deal signed in 2011.

The Mistral-class vessels can carry 700 troops, 16 helicopter gunships and up to 50 armored vehicles. A second French-built warship which was part of the deal is due to be delivered to Russia later this year.

Both warships now float in a dock in the French port of Saint-Nazaire.