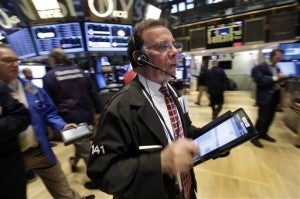 But analysts said a lower profit forecast from health-care giant Johnson & Johnson due to the strong dollar underscored fears that the greenback will dent multinationals’ earnings reports in the coming weeks.

US retail sales rebounded in March from a three-month slump, rising 0.9 percent, slightly below the consensus estimate of 1.0 percent.

Johnson & Johnson, another Dow member, was flat after trimming its full-year profit forecast due to the strong dollar. First-quarter net income translated into $1.56 per share, two cents above expectations.

Freight railroad Norfolk Southern dropped 4.2 percent following a warning that first-quarter earnings are expected to be 15 percent below last year’s due to lower revenues, in part from a decline in coal volumes.

Online real estate company Zillow dropped 1.4 percent after warning that 2015 would be a “transition year” following a large acquisition of rival Trulia. Zillow projected 2015 sales of $690 million, well below the $753 million market estimate.

Cosmetics company Avon shot up 14.2 percent on reports it is considering the sale of its North American unit.