Chef dances to own music, stands out from the crowd 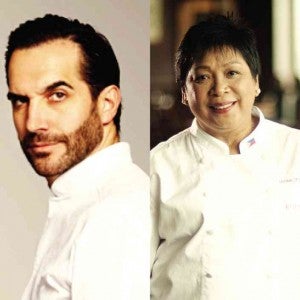 A year ago, a visiting judge from the World’s 50 Best Restaurant Awards confided that she observed that one of our celebrated restaurants practicing molecular gastronomy seemed to have copied the entire menu of Singapore’s Restaurant Andre.

This cracked me up because we do have a tendency to mimic our inspirations. Aspiring singers copy Whitney Houston, Beyonce and now Ariana Grande; fashionistas mimic what’s in season, even if it’s mink; and even our Constitution was patterned after that of the United States.

So it was an absolute delight to find a chef who is dancing to his own music. His name is Jordy Navarra, the first Filipino to work with the great Heston Blumenthal. (Blumenthal is the chef of Fat Duck in Berkshire, England, which has three Michelin stars and was voted World’s Best Restaurant in 2006.)

Navarra’s music is 100 percent Filipino—quite literally—to the tune of Bahay Kubo. Black Sheep, where Navarra is executive chef, offers a salad that has all 18 ingredients in the nursery rhyme: singkamas, talong, sigarilyas, mani, sitaw, bataw, patani (you know the rest)—all in one delicious bowl! But in true Heston fashion, he makes the salad arrive at your table looking not like any ordinary salad but like baby plants on a mound of soil. The “soil” is in fact dehydrated eggplant mixed with peanuts! And so you are made to go through the motions of “unearthing” the various veggies in the song. It is brilliant.

The test, of course, is taste—and Navarra delivers. Who knew that mani would be such a great accent to sitaw, bataw and patani? The flavors and textures of this salad are delightful!

Another testament to his potential is his version of kinilaw. Instead of using tuna, he bravely goes for a kinilaw of lamb sourced from Bukidnon. It is presented to look like a log with little flowers growing on it. But when you bite into it, you know it’s lamb. To accent it, he has spiced tomato and dried tuna roe; to temper it he puts roasted cashews; to emphasize the kinilaw there is pickled cucumber; and just to make it pretty, there are wansoy flowers.

As a commitment not only to Filipino ingredients but also to Filipino culture, in spite of his fancy shmancy setting at Black Sheep, Navarra offers as his aperitif a cocktail of gin with aged calamansi, in a kwatro kantos bottle (the bottle of Ginebra San Miguel gin). To be appreciated straight from the bottle, like a “real man.”

Navarra is not the first to do this kind of thing in Manila, although he has taken the craft to a whole new level. Before this new generation of Filipino chefs doing molecular gastronomy with Filipino ingredients—Navarra, Rob Pengson, Carlo Miguel—Chef Myrna Segismundo was already roulade-ing lechon to the enjoyment of the guests at the old PCI Bank Tower’s Sign of the Anvil and later at Restaurant 9501 at ABS-CBN.

It must be destiny’s hand then that has Navarra helping Segismundo in her presentation for Madrid Fusion Manila this coming April 24 to 26.

Segismundo will be talking about coconuts: how we Filipinos use coconut in our cooking, the various techniques employed as well as the many uses of the coconut fruit.

Segismundo now only cooks for private dinners but we will have the opportunity to taste her cooking at the Madrid Fusion special dinner hosted by The Peninsula Manila featuring Mario Sandoval on April 25.

She will be cooking alongside guest chef Mario Sandoval of Coque, a Michelin-starred eating house in Humanes, Spain. Sandoval is credited with the “consecration” of the oven at Coque, which is a distinctive trademark of his cuisine as he tested what different woods from different local vendors contribute to cuisine and used that in the design of this oven, which has three different chambers in which foods can be simultaneously smoked or roasted with different woods. (Sandoval will talk about The Science of Roasts at Madrid Fusion Manila.)

They will also be joined in the kitchen by Chef Ricardo Acquisita, an Argentinian-Italian, who incidentally had worked at the industry-changing El Bulli, which held the title of World’s Best Restaurant for several years. It’s sure to be a fabulous dinner. (For inquiries, call The Peninsula at 8872888).

The last week of April is turning out to be crazy hectic as well with the following upcoming events:

Not related to Madrid Fusion, on April 20, two amazing chefs from Buenos Aires—Fernando Rivarola and Christina Sunae and of El Baqueano (ranked No. 18 in last year’s World’s 50 Best list)—will be cooking at Your Local for an eight-course degustation hosted by Pinoy Eats World (For reservations call or SMS +63917-5919898).

Then from April 24 to 26, the Manila food scene will just be crazy!

At Black Sheep, Alvin Leung, of three Michelin starred Bo Innovation in Hong Kong, though, will be cooking on April 25, Saturday. (For inquiries/reservations, call Black Sheep 4784498). Leung is also one of the speakers at Madrid Fusion Manila. Ivan Brehm, a Mugaritz “grad” who is making waves with his restaurant Bacchanalia in Singapore, will be joining Navarra on a date yet to be confirmed.

Gallery Vask has three great dinners lined up: Elena Arzak on the 24th, Vask’s own Chele Gonzalez on the 25th, and Andoni Luis Aduriz of Mugaritz on the 26th. (For reservations call 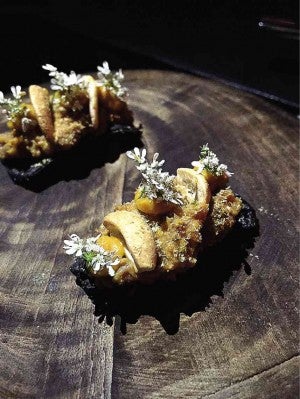 Fairmont will feature Paco Roncero with our very own Margarita Fores on April 25, same date as the dinner of Myrna Segismundo with Mario Sandoval at the Peninsula.

The Manila food scene has never been as exciting. What a blessed month indeed!