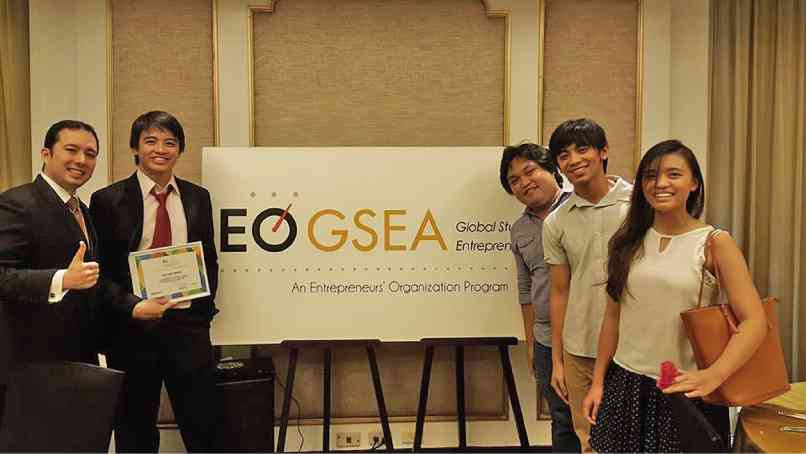 IT ALL began with a social networking site put up by Filipino college kids, where travelers can post an upcoming overseas trip and then earn extra income by accepting online requests to bring home goods.

This project has since evolved into muber.com, an online marketplace for travelers willing to act as couriers for hard-to-find items.

The site is seen having great growth potential, which is one reason why the students behind the start-up company recently won the Philippine Global Student Entrepreneurship Awards (GSEA), a premier competition organized annually by the

Leo is the chief executive officer, Life the chief operating officer and Francis the chief technology officer of the Pinoy dotcom firm.

By winning the GSEA country championship, the team bagged a cash prize of P250,000 and the right to represent the Philippines at the global GSEA competition to be held this April 15 to 17 in Washington DC.

Leo, being the CEO, will represent the company and be among the eight from Asia—all winners in their respective countries—who will vie for the global award, which comes with a $10,000 cash prize.

But more than any cash prize, GSEA offers a mentorship program that will allow these young entrepreneurs to level up, said Raymond Rufino, EO’s regional head for Asia for the GSEA program.

“With that, they (mentors) can really provide good valuable input and facilitate the growth of the business,” Rufino said, “The partnership with the mentors is very critical because we feel that’s how you can bring these students to the next level.”

The idea for the dotcom firm was born in the United States.

Leo, a Life Sciences or Biology student, was doing laboratory research at Harvard University under a fellowship program in 2013 when he reunited with high school classmate Francis, who was then a senior college student at MIT.

They talked about entrepreneurship and how start-up companies in the United States were becoming the next big thing in the corporate world.

“While we were traveling as well, so many people were asking us to buy stuff for them, so we thought, why not create a platform for that niche of people who do that almost every day for their friends and family? That’s where we got the idea for the platform,” Leo told the Inquirer.

Leo, who is now on his fourth year at the Ateneo, and Francis cofounded Muber, which was incorporated in Delaware.

“Help another person by fulfilling delivery requests while earning more from your travels… Earn as much as P700 per item. Easy and Hassle-Free!” Muber says on its website, which is designed to appeal to a younger crowd.

The pitch is to earn while helping someone get the goods that they want.

In the beginning, Muber was populated by netizens from the founders’ own circle of friends but now, it has built a database of what these young entrepreneurs describe as “trusted” travelers.

“If you’re the shopper, you just go to our website—it’s more of an e-commerce site—and you go through the whole process. The items that are listed there are not usually found in the Philippines or if they are, they are relatively cheaper [on the site],” Leo explained.

Leo said that when Muber was launched in February 2014, the site functioned more like a social networking site.

“After a few weeks, we realized our users only wanted to get their shopping items as fast and affordable as possible, no matter how it was fulfilled. So in September last year, we relaunched Muber to have this kind of model—an end-to-end shopping gateway for overseas items with a promise that your items will arrive in five to 10 business days,” he said.

This upstart dotcom firm has already fulfilled over a hundred transactions since its relaunch in September last year.

Based on these young entrepreneurs’ computations, if they reach 300 to 400 transactions in a month, Muber can break even.

Leo said among the most requested items were card games, specifically Cards Against Humanity, which are available only in the United States.

He also cited requests for beauty products and recently, the Jawbone fitness tracker bracelet. The items going through Muber are typically worth $80 or $100 or up to $150 apiece.

For now, the goods are coming from the United States, but these young entrepreneurs are thinking of expanding into other countries also served by the likes of Amazon.

Japan and Singapore were identified as areas for immediate expansion.

For now, the founders themselves personally go to the airport to pick up the items from their volunteers and then deliver these to their clients.

For more difficult addresses, they use couriers.

They also handle the technical requirements themselves, such as addressing glitches and bugs. That means that they have to be online all the time.

How then are the Lofrancos able to balance studies with this upstart business?

To settle the transactions, Muber uses a third party software that takes care of credit card transactions. The company does not yet have a cash-and-delivery service.

By highlighting the stories of these successful student entrepreneurs, EO hopes to embolden others to also put up their own business.

EO hopes to change the mindset through the GSEA, which is unique because it links partner students with established EO mentors.

“Aside from helping them with the presentation, this entrepreneur is also a mentor in their business. They can open doors for them so we try to match them. For example, if the student is in the tech sphere or industry, we’ll try to find a tech entrepreneur in the same space to mentor them. If they’re in the food business, we’ll try to find an entrepreneur that’s also in the food industry. With that, they can really provide good valuable input and facilitate the growth of the business,” Rufino said.

Another unique aspect is that beyond the business plan, this competition looks at the student himself. “If you look at our judging criteria… it’s really judging whether the student entrepreneurs demonstrated what we feel are the important characteristics and traits of a successful entrepreneur. Were they able to learn from their mistakes? Were they able to articulate the vision and marshal the resources necessary to achieve that vision? Were they able to look for and get assistance when they needed it, rather than doing it all on their own? In terms of strategy, were they able to formulate a strategy that combine financial planning, marketing and public relations? It’s not so much whether the business is a huge business or a successful business; in fact your business doesn’t even have to be profitable, all we need is that you have sales,” Rufino said.

The only requirement for the program is that the business must be operating for at least six months and has some revenue. “Even if it’s not much, even if you’re losing money but you have revenue, that’s enough for us,” he said.

For Rufino, it’s exciting to see so many students successfully launch businesses.

“When I was in college, starting my own business was something I couldn’t even imagine. It was something that was just so far from reality for me. There was just school, being part of a school team and getting together with friends. But starting and running a business, I couldn’t imagine,” he said.

“Yet, today, we have all of these amazing students who are launching and running businesses. One of the things that is exciting about that is, if other students hear their stories and see ‘kaya ko pala (I can do it after all),’ it’s not impossible. It’s something that is attainable, that is doable. That process is the goal: to try to inspire young people to say ‘kaya pala (it can be done).’ If other students were able to do it to pursue their dreams and start businesses, then why can’t I do that, too? And, if we can do that for the Philippines, where you inspire an entire generation of students to start picking up entrepreneurship, imagine what they would be like 10 or 20 years after graduation. Some of these students may be the next big business owners.”