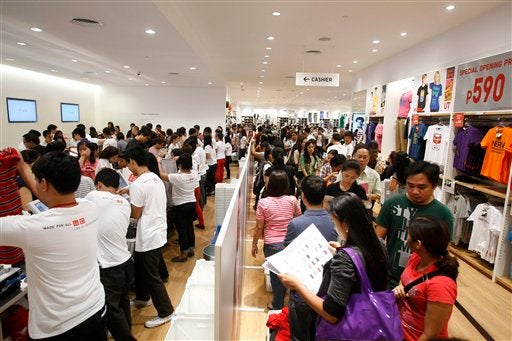 Filipinos shop for clothes and other items at the opening of Japan’s Uniqlo brand clothing store at the Mall of Asia at suburban Pasay city, south of Manila, on June 15, 2012. The Philippine Department of Trade hopes to entice Japan’s Fast Retailing Co. Ltd., owner of the brand, to set up factories in the Philippines. AP PHOTO/BULLIT MARQUEZ

Who is the richest man in Japan?

According to Forbes, retail mogul Tadashi Yanai is the No. 1 richest man in Japan with a net worth of US$21.1.

Yanai was ranked second last year but a $3.3 billion has been added to his fortune from sales increase at his apparel chain, Uniqlo. The 66-year old retail mogul is also the founder and CEO of Fast Retailing.

Masayoshi Son, who was the richest man last year ranked second after his net worth fell to $13.9 billlion. Son is the man behind mobile internet powerhouse, Softbank.

The 69-year old Nobutada Saji and his family is the richest in Japan with a net worth of $10.9 billion, which is down $300 million from last year. Saji steppped down as the CEO of drinks powerhouse Suntory, after he handed it to an outsider but hopes to bring the company into the hands of his family.

Son, however, remains as chair of the company founded by his grandfather Hiroshi Mikitani, Chairman and CEO of Japan’s biggest e-tailer, Rakuten, landed at No. 4 with a net worth of $10.5 billion, up 36% from last year. Mikitani is a consummate acquirer.

His latest acquisition is Ebates, an online rebate site in the United States. He also invested $300 million in Lyft, a competitor to ride-sharing company Uber.

Forbes said the minimum amount required to make the list was $600 million, up from $500 million last year.

The top ten richest in Japan are:

Interested readers may visit forbes.com/japan for the complete details. TVJ