Sarangani representative and boxing champion Manny Pacquiao led the list of the country’s top individual taxpayers for 2013, according to a list released Friday by the Bureau of Internal Revenue. 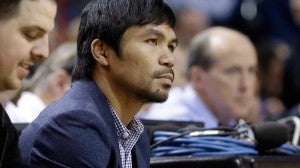 Vivian Que-Azcona, president of Mercury Drug, was eighth with P51.6 million in taxes.

The BIR releases to the public the list of 500 top individual and corporate taxpayers annually in keeping with the requirements of Republic Act No. 9480, known as the Philippine Tax Amnesty Act of 2007.

Earlier this month, the BIR also released the list of top corporate taxpayers for 2013, which was topped by two Pangilinan-led companies Smart Communications Inc., which had an income tax due of P10.89 billion and Meralco, which paid P9.69 billion in taxes.