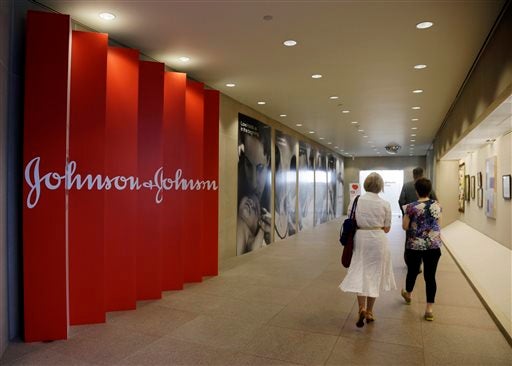 In this July 30, 2013, file photo, people walk along a corridor at the headquarters of Johnson & Johnson in New Brunswick, N.J. Major drugmakers, the British government and a top Alzheimer’s research charity are pooling more than $100 million to create a global fund to accelerate efforts to find a treatment or even a cure for the mind-robbing disease within a decade. AP

TRENTON, N.J. — Major drugmakers, the British government and a top Alzheimer’s research charity are pooling more than $100 million to create a global fund to accelerate efforts to find a treatment or even a cure for the mind-robbing disease within a decade.

The new Dementia Discovery Fund will function like a venture capital fund. It will identify promising laboratory discoveries in Alzheimer’s disease and other forms of dementia, then distribute money to cover costs for the steps needed to prepare for and then begin the first tests in patients — what’s called translational research.

Jeremy Hunt, the UK health secretary, was to announce the new fund Tuesday in Geneva at the World Health Organization’s first conference on dementia. The event follows a commitment made at the Dementia G8 Summit in December 2013 to increase investment in such research.

Dementia is one of the world’s top health challenges, affecting about 47 million people. That number is expected to double by 2030 and more than triple by 2050 as the global population ages. Meanwhile, dementia already costs the global economy more than $604 billion each year, a figure sure to skyrocket without effective treatments.

Yet despite billions of dollars’ worth of research over the past couple of decades by government, academic and industry scientists, the handful of approved Alzheimer’s medicines only ease symptoms temporarily.

Initial financing for the groundbreaking project has been committed by the British government, the charity Alzheimer’s Research UK and five companies: Johnson & Johnson, Eli Lilly and Co., Pfizer Inc. and Biogen Idec Inc. in the U.S. and Britain’s GlaxoSmithKline PLC.

The five drugmakers all are trying to develop treatments for Alzheimer’s and other forms of dementia, including strategies that use pills, antibody-based drugs and other methods to remove or inhibit formation of proteins that block nerve connections in the brain. Scientists also are working on better ways to diagnose Alzheimer’s earlier, before the disease has caused irreversible damage to the brain.

“The venture capital fund will choose projects based on the most promising science, the fastest time to patients and the fastest time to results,” Dr. Paul Stoffels, Johnson & Johnson’s chief scientific officer and global head of pharmaceuticals, told The Associated Press.

Stoffels said that the funds will be distributed to small biotech companies and other entrepreneurial ventures that lack the money for expensive patient studies. He foresees at least 10 grants being awarded initially, beginning this summer.

The approach is innovative. Executives at such small companies typically spend considerable time trying to persuade investors to put up money for their research, which can delay projects and create uncertainty. And much of the capital will be coming from big drugmakers that normally would be seen as rivals of the small companies — or potential acquirers.

The U.S.-based Alzheimer’s Association, which is not involved in the new fund, has estimated that at least $2 billion a year in research funding will be needed to produce an effective treatment by 2025. That’s the goal of the National Alzheimer’s Project Act, which President Obama signed into law in 2011.

Dean Hartley, the Alzheimer’s Association’s director of science initiatives, said the federal government has since been increasing its funding for laboratory research, reaching $560 million in the current fiscal year.

Hartley said the new fund is important, both for the amount of money already committed and because such collaborations can be much more successful than any individual organization’s efforts.

“Do we need more money? No question,” Hartley said. “But if we don’t have these dollars, we’re never going to make progress.”