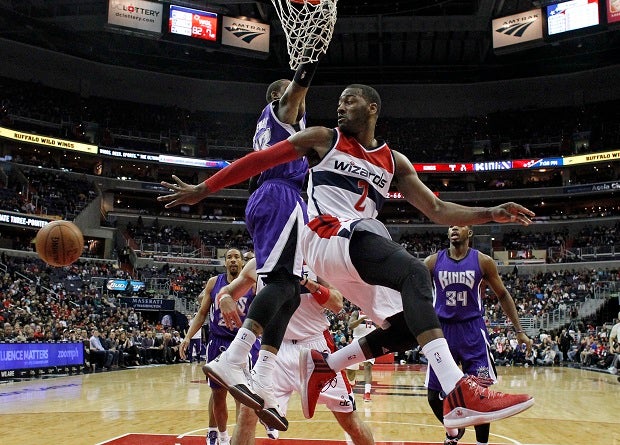 GOODBYE STRIPES. Washington Wizards guard John Wall (2) passes the ball under the basket as he is covered by Sacramento Kings guard Ben McLemore (23) in this NBA basketball game Saturday, March 14, 2015, in Washington. NBA players and fans will be missing the stripes of Adidas after the 2016-2017 season after the shoemaker said it would no longer renew its partnership with the league. AP

NEW YORK, United States — NBA teams will no longer be outfitted by Adidas after the 2016-17 season, as the shoemaker and sports gear company said Monday it wouldn’t renew its partnership with the league.

The league had already informed Adidas that it was opening the bidding for the next contract, according to a person familiar with the process. The NBA is expected to announce a new partnership sometime around its Board of Governors meeting next month, the person told The Associated Press on condition of anonymity because details are still being finalized.

But Adidas, which has slipped to No. 3 in sporting apparel sales in the U.S., behind Nike and Under Armour, said in a statement that it wouldn’t bid.

The company, based in Herzogenaurach, Germany, said that “while we have enjoyed a successful long-term relationship with the league, we continually review our partner agreements to ensure they are meeting out investment and delivering on our brand and business needs.”

Adidas became the exclusive outfitter for the NBA, WNBA and NBA Development League in 2006 under an 11-year deal. Adidas supplies the NBA with uniforms and holds the rights to NBA-branded merchandise worldwide.

It also has individual endorsement deals with top NBA players such as Chicago’s Derrick Rose, Houston’s Dwight Howard and All-Stars Damian Lillard of Portland and John Wall of Washington.

Global brands head Erich Stamminger left the company last year and CEO and Chairman Herbert Hainer had recently announced he would step down, leadership shake-ups that could have created uncertainty for the NBA.

That could leave the door for Nike, the partner before Adidas, to move back in, or Under Armour, which has seen its basketball business grow thanks to the success of Golden State star Stephen Curry.