Big tuna still biting, but for how long? 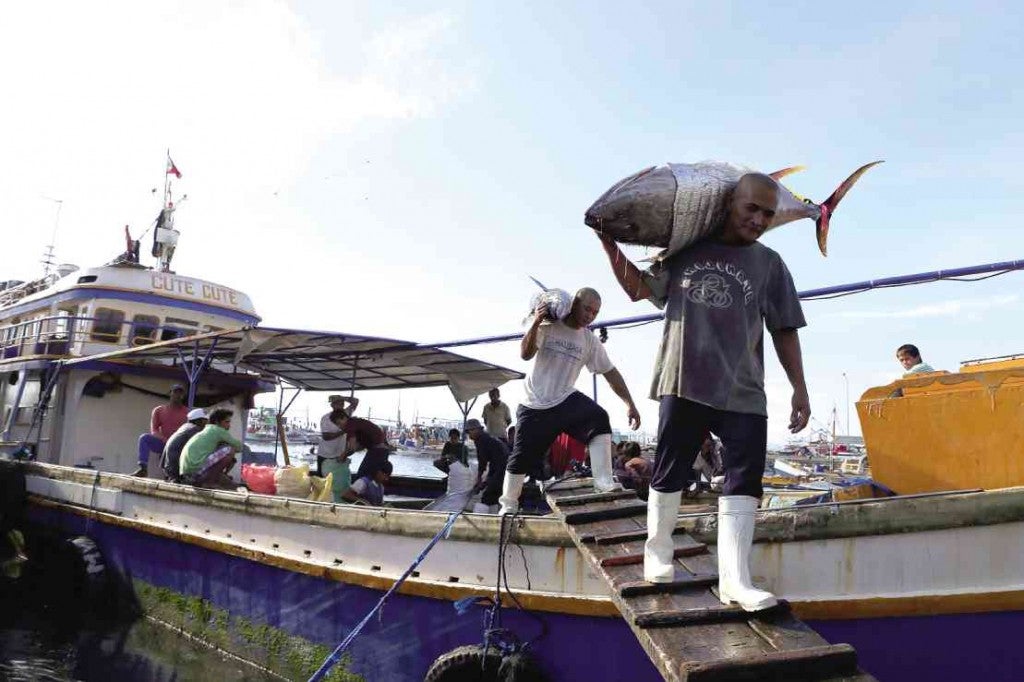 MANILA, Philippines–In early September 2014, when General Santos City attempted to be entered in the Guinness Book of World Records for the largest display of tuna at its landing port during its Tuna Festival, the day’s haul revealed something else—the biggest of the caught high-value deep-sea fish weighed only 35 to 40 kilograms.

“That’s concrete evidence that the fish are getting smaller,” said Raul Gonzales, spokesperson of the Alliance of Tuna Handline Operators in General Santos, touted as the country’s Tuna Capital.

“Old-timers, who used to fish here in the ’70s said they were used to catching tuna weighing as much 60-70 kilos, but now, what do we get?” he asked.

Not only is tuna catch dwindling, but the fish are also getting smaller in size and weight, Gonzales said.

Such assertion may not hold water for another group of catchers—the purse seine fishers—as well as the government, specifically the Bureau of Fisheries and Aquatic Resources (BFAR), despite its serious concern over the environmental risks of prevailing fishing practices and the future of the tuna industry in the Philippines.

Environmentalists consider handline fishing—which uses the traditional hook-and-line method—more environment-friendly and more sustainable than purse seine fishing, which uses a large wall of netting with floats and does not discriminate in hauling both juvenile and adult fish.

Handline fishers target only the more mature and economically viable adult tuna and spare the young to allow them to grow till the next harvest. But purse seiners argue that handline operators, because they target big tuna, also run the risk of catching the big tuna before it can lay their eggs and spawn, said Ambutong Pautong, regional director of the BFAR.

For Pautong, there is nothing unusual about the size or weight of tuna being caught in the Celebes Sea, a natural breeding ground which connects to the Sarangani Bay. Since this area has been the hatching ground for tuna, the tuna that are found here are not yet as big as those in other areas, he said.

In fact, he said, the fisheries agency has made a study on the tuna catch there and even used its findings to justify increased access of Filipino tuna fishers to farther areas.

“The BFAR submitted the study to the West and Central Pacific Fisheries Commission (WCPFC), arguing that Filipino tuna fishers be allowed to fish in the high seas because the Philippines is a breeding ground for tuna,” Pautong said.

In a separate interview, Rosanna Contreras, executive director of the Socksargen Federation of Fishing and Allied Industries Inc. (SFFAII), said the Philippines has been considered a spawning ground and a nursery for tuna.

“It is here where tuna lays their eggs and hatch, so one can’t really expect to catch the big tuna here,” she said.

Contreras found it pointless to compare handline and purse seine fishers, since they are targeting different fish. For one, she said, purse seiners go for the skipjack tuna, which is demanded by canneries, while handline operators are after the much bigger yellowfin tuna and marlin.

The World Wide Fund for Nature (WWF), however, pointed out how the small yellowfin and big-eye tuna school with adult skipjacks so that they also run the risk of being caught by purse seiners.

But then again, purse seiners are no longer operating in domestic waters after they were granted exception by the WCPFC to operate in the high seas, Contreras said.

Gonzales said he once asked representatives from the WWF and another environment group, Greenpeace, to validate scientifically the perceived trend of decreasing tuna size in other fishing areas. The groups, he said, made similar observations but acknowledged that no definitive comparative studies had yet been undertaken through the years.

He blamed the government for its failure to regulate the growing number of fish aggregating devices (FADs) called “payao” or floating devices that attract schools of fish, coupled with the long-running problem of overfishing.

“They’re not only getting few because of the thousands of FADs walling off the Philippine sea, they’re also getting smaller,” Gonzales said. “Even juvenile tuna are caught, no more chance for tuna to grow big.”

Regulating the devices will not only protect small handline operators but will also prevent the depletion of tuna population in Philippine waters, Gonzales said.

Pautong said the FADs had already been subjected to regulations. Under existing laws, each licensed tuna catcher is allowed only up to 40 FADs.

Even handline fishers are using FADs to attract fish to their area, Contreras said. “If they want to ban the FADs, how will they operate?” she asked.

Gonzales countered: “We only catch mature tuna, which has more value. This will allow small tuna to grow for the next harvest season.” Handline fishing, he stressed, would not deplete the tuna population.

He said the large number of FADs “distort fishing grounds” because they prevent a large number of tuna from reaching the municipal waters, where small and medium handline operators operate.

Since they could no longer get a good fish catch in the municipal sites, where they’re licensed to operate, some fishing vessels start to traverse Indonesian waters to fish.

Seven years after Republic Act No. 9379, or the law defining handline fishing, was passed, the BFAR, along with other government agencies involved, still has to issue its implementing rules and regulations (IRR). The law would have greatly benefited handline fishing operators by giving weight to traditional fishing practices and by defining hand-line commercial fishing boat and commercial net fishing vessel.

Pautong said it was taking the agencies too long to draft the IRR because handline operators insisted on lowering the standards being set for compliance. Before a fishing vessel is given license by the BFAR, it must meet the standards of the Marine Industry Authority (Marina) and the Department of Transportation and Communications (DOTC).

Handline operators find it hard to comply with the standards, Gonzales said. For instance, he said, Marina requires boat operators for handline fishing to be at least high school graduates and the submission of a “vessel plan,” which they find very costly.

Instead of helping small and medium handline operators, Gonzales said, the BFAR seems to be very quick in giving its attention to big commercial operators.

Even the law that provides handline tuna operators access to the high seas will benefit only big commercial operators who can afford to shoulder the high cost of deploying their vessels in the international waters.

“You need to travel at least 1,000 nautical miles one way before you reach the high seas,” Gonzales said. “We don’t have the money to shoulder the cost.”

Many of them have switched to smaller boats to sustain operation costs. Income from dwindling catch could no longer keep up with the high cost of fuel, which makes up 70-80 percent of operation costs, Gonzales said.

“These are hard times for tuna handline operators,” Gonzales said. Yet, he observed that purse seine operators seem to be increasing in number, even in General Santos.

“Though I’m not aware of the volume of their catch, the fact that they are lobbying for access to the international waters only tells us they already sense how stiff they will be competing with each other if they limit their operations here.”

But BFAR’s Pautong said this is the nature of the business.

According to the Tuna Fishery Yearbook released by the WCPFC in November, tuna production within the western and central Pacific Ocean has been increasing in the last five decades but this has also been coupled by the growing use of purse seine fishing.

While the Bureau of Agriculture Statistics (BAS) registered a slight increase in the volume of tuna production in its report in the first quarter of this year. It already included the volume of tuna unloaded by foreign vessels on the General Santos port.

If tuna unloaded by foreign vessels is disregarded, Gonzales said, the data would show the real picture of depleted tuna production in Philippine waters.

“They were trying to hype GenSan as tuna capital in the Philippines, but look at their fish catch, they’re getting smaller,” he said.

The government can arrest the problem only by encouraging environmentally sustainable fishing methods, like handline fishing, Gonzales said.

He still thinks of stories told by old-timers in the industry. “They said tuna used to be found just around the bay (of Sarangani),” Gonzales said. “Now, you could no longer find them there. From time to time, you can find a rare one outside the bay but usually, you need to go very far to catch a tuna.”

Pautong does not seem to be sentimental about it. A number of environmental changes have already occurred since then, he said, and people could no longer expect to have the same catch.