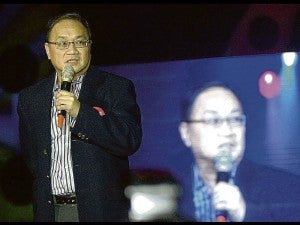 Shares of Philex Petroleum Corp. on Monday sizzled as the company unveiled an upbeat exploration plan for its concession area in Recto Bank (formerly Reed Bank), located about 148 kilometers west of Palawan province and believed to contain 3.4 trillion cubic feet of natural gas.

Philex Petroleum shares, which were listed on the Philippine Stock Exchange (PSE) by way of introduction or without any initial public offering, soared 617 percent to close at P8.60 from an initial listing price of P1.20 per share. The shares surged to as much as P13.

Philex Petroleum is chaired by Manuel V. Pangilinan, who also heads the country’s largest telecommunications company and its biggest power distributor, as well as major infrastructure and media firms.

The oil and gas exploration unit of local mining blue chip Philex Corp. started trading on the PSE’s second board under the ticker “PXP.”

“PXP’s activity was a mix of speculation and bona fide investing. The listing of P1.20 was likewise based on very conservative assumptions,” said Manuel Lisbona, deputy chief of PNB Securities.

After the listing ceremonies, top officials led by Pangilinan said the group would invest about $80 million in Service Contract No. 72 (SC72) covering part of the Recto Bank.

The amount will cover survey, appraisal and other exploratory works on the 8,800-square-kilometer concession area within the next two years.

Philex Petroleum’s UK-incorporated oil and gas unit Forum Energy plc (FEP) has a 70-percent interest in SC72, which the Philex group is hoping to be the Philippines’ “next Malampaya” gas field.

“This is one of the few assets (in the Philippines) with a (gas) discovery and it’s a sizeable discovery compared with other assets that have been opened up for bid. So this is more advanced than other opportunities and we have a 70-percent interest in it,” Pablo said, when asked to explain the company’s plan to prioritize SC 72.

“We know that Malampaya is a very successful project. The question is can it be the next Malampaya?” he said.

The SC72 concession area, however, is subject to international boundary issues pertaining to certain areas of the West Philippine Sea (South China Sea).

Recto Bank is well within the country’s economic exclusion zone that extends to 370 km (200 nautical miles). Foreign Secretary Albert del Rosario said in July that Recto Bank was not part of the contested Spratly group of islands in the West Philippine Sea.

The Spratlys, believed to have huge oil and gas deposits and also considered a rich fishing ground, are claimed entirely by China, Taiwan and Vietnam and in part by Malaysia, Brunei and the Philippines.

Manila has complained repeatedly this year that the Chinese military has become much more aggressive in asserting China’s claims to the area.

It said one of the first aggressive acts occurred in February when a Chinese naval vessel harassed a ship belonging to a Philex Petroleum subsidiary that was carrying out seismic explorations in the Recto Bank.

In its prospectus issued on Aug. 31, Philex Petroleum acknowledged the territorial concerns but assured potential investors that the Philippine government would support it.

“The uncertainty of how these issues will be resolved may be a source of continuing risk to the operations,” the prospectus said. “The company will continue to rely on government support and policy in addressing such geopolitical issues.”

Asked about the territorial dispute, Pangilinan said:  “As a Filipino, how can I say that it belongs to the Chinese? Recto Bank belongs to us.”

In February last year, the Department of Energy awarded SC72 to Philex Petroleum. SC72 has a seven-year exploration period extendible by three years and a 25-year production period that can be extended by 15 years.

The service area contains the Sampaguita gas field discovered in 1976 and a number of leads identified from earlier seismic evaluation.

In September 2006, results of the interpretation of a 3D seismic program at the Sampaguita gas discovery performed by independent consultants Count Geophysics Ltd. indicated 3.4 trillion cubic feet of gas-in-place.

Pangilinan said the development of alternative natural gas resources was important given the processing facilities in Batangas province that rely on gas, especially if Malampaya’s resources run out.

Without an indigenous source of fuel, power rates in the country will continue to be high, he said.

If and when Philex Petroleum finds this concession area to be similar to or even bigger than Malampaya, Pangilinan said the company would bring in strategic foreign partners even if this would mean the dilution of its interest.

In the case of Malampaya, he noted that development cost was about $5 billion, which was why Shell and Chevron had to come in.

“When somebody puts in $5 or $10 billion, our stake will be modest, although if it’s a big gas (field) even if our stake is modest, we’ll earn a lot of income,” Pangilinan said.

Unless local capital markets deepened significantly, Philex Petroleum will not be able to finance development by itself, he said.

Because its shares are now widely held, Philex Petroleum was not required to undertake an initial public offering (IPO).

Philex Mining shares likewise traded up on the stock exchange on Monday, joining Philex Petroleum in bucking the general downturn.

Philex Petroleum also has interests in exploration assets in Peru and Vietnam via Pitkin Petroleum Plc. With reports from Reuters and AFP