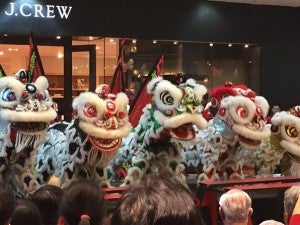 “Although I am not Chinese, I still observe Chinese New Year with my friends. I didn’t even know about this event here at Valley Fair, but I think it’s amazing how they are observing it and sharing it was the entire public,” said Cece Bamburg.

“My favorite part of the event had to be the traditional lion dance because I celebrate Chinese New Year every year with my family and I have seen the dance performed several times, but I really enjoyed the intense interpretation of this group,” said shopper Shannon Luu. “It was really impressive and made me proud of my culture.”

Several performances and Lunar New Year activities at the shopping center were announced. Staff handed out traditional Chinese red envelopes to children, Chinese candy was given away and a calligraphist wrote messages in Chinese for attendees to keep as a reminder of this event. 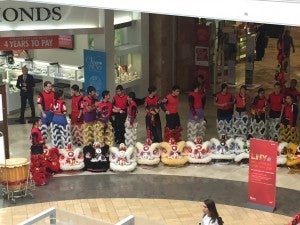 Asian Americans for Community Involvement (AACI) set up a wishing tree in the middle of the mall for shoppers to be able to donate to the organization, the largest group in Santa Clara County that focuses on the well being and strengthening of the Asian American community.

Team M Taekwondo did martial arts demonstrations. The group has been together for eleven years.  Crystal Choir performed Chinese folk music. The group aspires to be youth cultural ambassadors.  Other musical performances included the Crywolfs and a Filipino-American violinist who performed modern and pop-culture hits.

“This event was definitely worth attending because it introduced Chinese culture to everyone in the mall and it was a great mix between a traditional Chinese concept fused with a more modern spin of Chinese culture,” said shopper Stephanie Hsu. “It shows a great support of Chinese culture because there was such a wide range in age and ethnicity that was a part of the audience.”