Henry Sy is 73rd richest in the world, 11 other Filipinos in 2015 billionaires list | Inquirer Business

Henry Sy is 73rd richest in the world, 11 other Filipinos in 2015 billionaires list 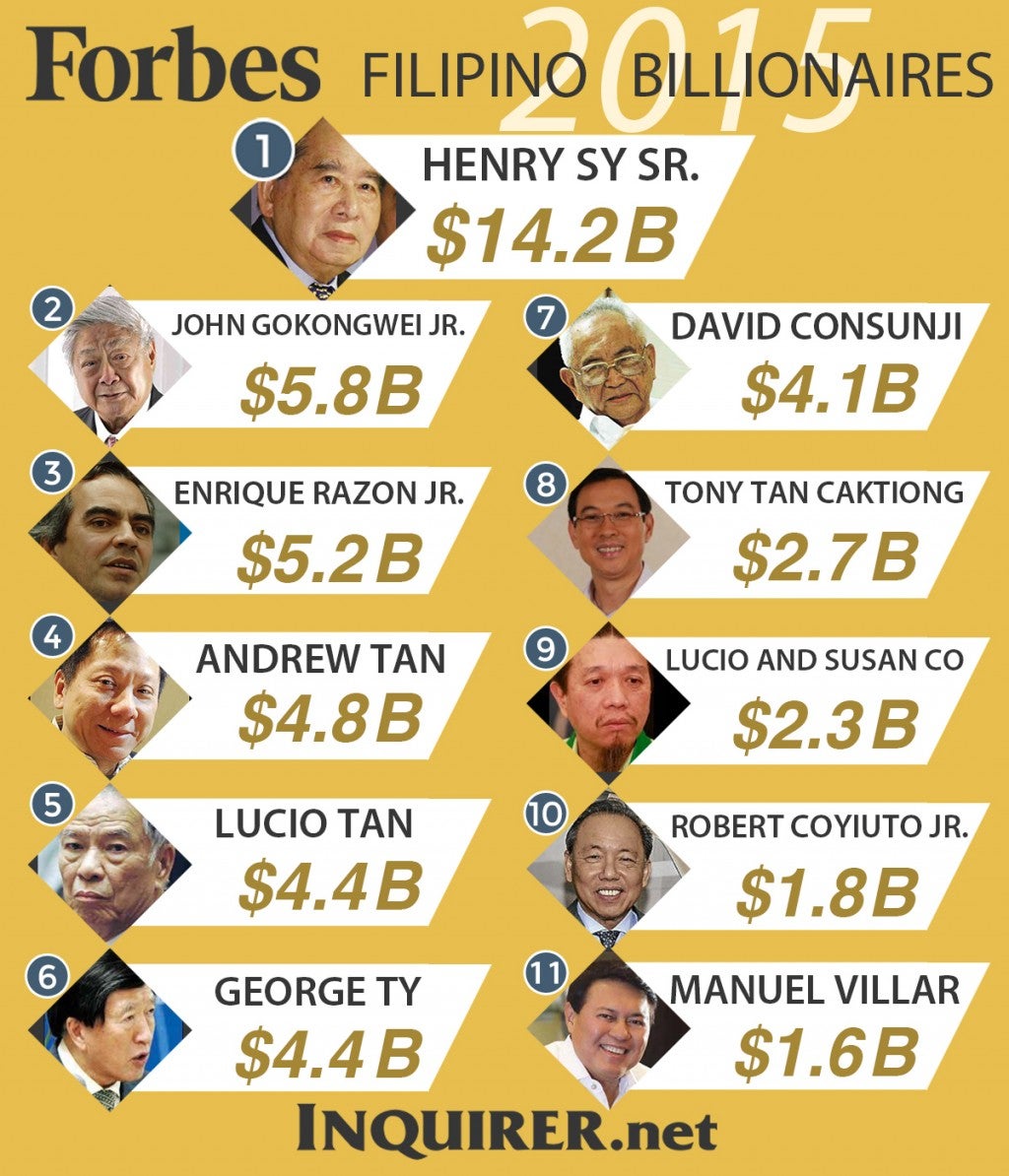 MANILA, Philippines — The number of Filipinos included in the exclusive billionaires’ circle have increased, a report by Forbes said.

With an increased net worth of $14.2 billion from last year’s $11.3 billion, mall tycoon Henry Sy Sr. maintains his spot as the richest man in the country.

The 90-year-old Sy, who ventured into retail, construction, and banking, ranked as the 73rd richest man in the world, a big jump from being 97th in 2014.

Sliding to third place is Enrique Razon Jr., of International Container Terminal Services Inc. and Bloomberry Resorts with a net worth of $5.2 billion from $4.2 billion in 2014.

The 54-year-old Razon jumped to 291st place from last year’s ranking of being the 354th richest man in the world.

In fourth place is Megaworld’s Andrew Tan whose ranking slipped from last year’s 319th to being 330th this year. Despite the slip, his net worth increased to $4.8 billion from 2014’s $4.7 billion.

Tan is the man behind liquor company Emperador and fast food chain McDonald’s through his Golden Arches Corp.

In fifth and sixth places are Lucio Tan and George Ty, both with a net worth of $4.4 billion. In the Forbes report, both tied in 369th spot.

Tan, whose net worth shrank from $6.1 billion last year, ventured in tobacco, airlines, banking, and property industries. Meanwhile, Ty’s net worth increased to $4.4 billion from 2014’s $2.3 billion. He is involved in banking, property, and energy sectors.

Other Filipinos cited as world’s billionaires include: DMCI’s David Consunji who ranked 405th this year with a net worth of $4.1 billion from 2014’s $3.3 billion; Jollibee and DoubleDragon’s Tony Tan Caktiong placed 690th with an increased net worth of $2.7 billion from last year’s $1.7 billion.

Puregold’s Lucio and Susan Co’s combined net worth of $2.3 billion placed them in the 810th place. The Cos were able to break into the list after they failed to be included last year.

Prudential and PGA Cars’s Robert Coyiuto Jr. placed 1054th with a net worth of $1.8 billion. Former senator Manuel Villar and Vista Land founder accumulated a net worth of $1.6 billion and is on the 1190th place.

Microsoft founder and philanthropist Bill Gates is the richest man in the world with a net worth of $72 billion.