US stocks edge higher, bringing market back to record 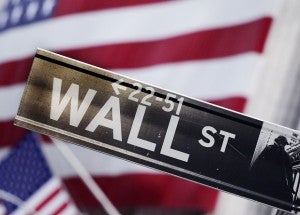 US stocks closed slightly higher Tuesday as investors continued to monitor talks between Greece and its creditors in hopes that a deal will be reached to keep the country from falling out of the eurozone. AP PHOTO/MARK LENNIHAN

NEW YORK—US stocks closed slightly higher Tuesday as investors continued to monitor talks between Greece and its creditors in hopes that a deal will be reached to keep the country from falling out of the eurozone.

With Tuesday’s gains, the S&P 500 is at another record high. US markets were closed Monday for Presidents Day.

Stock indexes had been lower most of the day, but recovered their losses on reports that progress was being made between Greece and its creditors.

Greece is looking to request an extension to its loan agreement, government officials said Tuesday. It’s an effort to reach a last-minute deal with the country’s European lenders and avoid the danger of a euro exit.

After five years of punishing austerity, Greece wants to scrap its existing program in favor of a new one with easier terms. If no agreement is reached by the end of the month, investors expect that Greece may have little option but to default and stop using the euro currency. Most analysts expect a deal will be reached in time.

“Greece’s new government wants more independence, but it doesn’t want that independence at all costs,” said Anastasia Amoroso, a global market strategist at JPMorgan Funds. “The extension is good news because it buys Greece and the eurozone time to reach a long-term resolution.”

While the major stock indexes moved little Tuesday, investors made noticeable moves out of the tradition safe havens: bonds, gold and dividend-paying stocks such as utilities.

The yield on the benchmark US 10-year note jumped to 2.14 percent from 2.05 percent on Friday.

Bond yields have been climbing sharply the last two weeks as investors become more confident that the Federal Reserve will raise interest rates this year. Also investors have been using US Treasurys as a safe play against Greece and euro-denominated government bonds. If a solution is found for Greece, it would make European stocks more attractive and give investors less of a reason to be holding ultra-safe US government debt.

On Wednesday, the Fed will release the minutes from its January policy meeting. Investors expect the language to signal that the nation’s central bank is on track for a modest interest rate increase as early as June.

Among individual companies, Goodyear Tire & Rubber’s stock rose after the company reported a jump in quarterly profit, thanks to a $2 billion tax credit that offset the effect of a stronger dollar on sales. Goodyear rose 71 cents, or 3 percent, to $26.62.

Starwood Hotels rose $2.09, or 3 percent, to $80.64 after the company announced the sudden resignation of its CEO Frits van Paasschen. Starwood’s board said the company would pivot toward timeshares and other high-growth areas of the hospitality industry.

In other energy futures trading on the NYMEX:

— Natural gas fell 4.5 cents to close at $2.759 per 1,000 cubic feet.–Ken Sweet with Elena Becatoros and Derek Gatopoulos in Athens