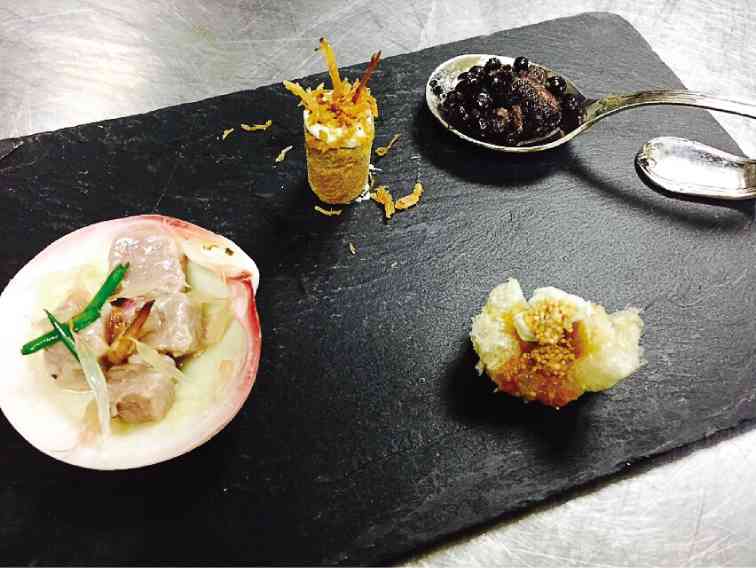 For the first time in the history of Madrid Fusion—the biggest gastronomic trade fair in Spain—Filipino chefs and products were given the spotlight under this year’s theme of Traveling Cuisines.

A Philippine booth was set up by the team of Tourism director Verna Buensuceso that was strategically located at the entrance of the trade venue.

It was fascinating watching the reaction of the foreigners to Philippine products. Many asked if the achara is ceviche. The booth tenders had to explain that achara is not ceviche, and that it accompanies our savory dishes like adobo and piniritong isda. 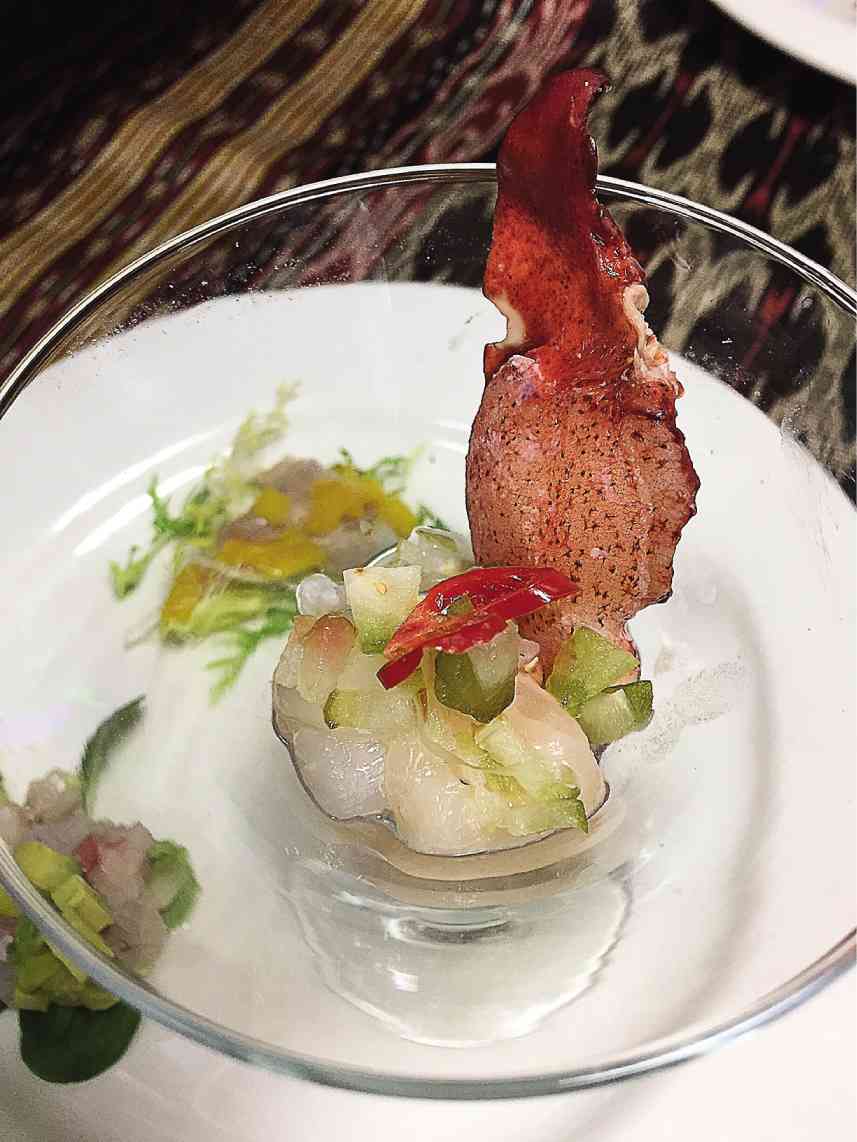 The Spanish were curious at the use of peanuts in Bulacan hot chocolate, while the pili nuts were a hit, with guests in awe of its texture.

On the last day of the gastronomic congress, Madrid Fusion Manila was officially launched. Philippine Ambassador to Spain Carlos Salinas took to the stage and invited the world community to visit the Philippines from April 24 to 26 at the SMX Convention Center. Because of our common heritage, he thanked the organizers for choosing the Philippines as the venue for Madrid Fusion in Asia.

Filipino chefs led by Myrna Segismundo, Margarita Fores, Claude Tayag and Chele Gonzalez were then called to the stage and were proudly presented as the ones who would be giving talks during the Madrid Fusion in Manila.

Philippine chefs were then joined by the most acclaimed chefs of Spain, Elena Arzak, 2012 World’s Best Female Chef, and Andoni Luis Aduriz of the restaurant Mugaritz, considered one of the most influential chefs of our time.

In an interview with Chef Arzak, the humble and charming chef said that for 10 years, she had wanted to go to Manila. She then invited everyone to come to Madrid Fusion Manila, describing it to be an important event in Asia (see video in margauxlicious.com).

Meanwhile, Chef Aduriz and Pastry Chef Paco Torreblanca both said that they would go to Manila not only to participate in the congress, but also to learn of Philippine flavors and ingredients so that they could use them at their world-renowned restaurants.

It wasn’t only during the day that our chefs wowed Madrid Fusion audiences. Come dinner time, our chefs presented their brilliant culinary skills at various events.

Chefs Juan Carlos de Terry, Bruce Rickets and Gonzalez took over the kitchen of Ramses Restaurant for the press cocktails for Madrid Fusion Manila, while flairtender Dennis Hipolito got the prestigious guests buzzed with his cocktails using Manille liqueur and Don Papa Rum. 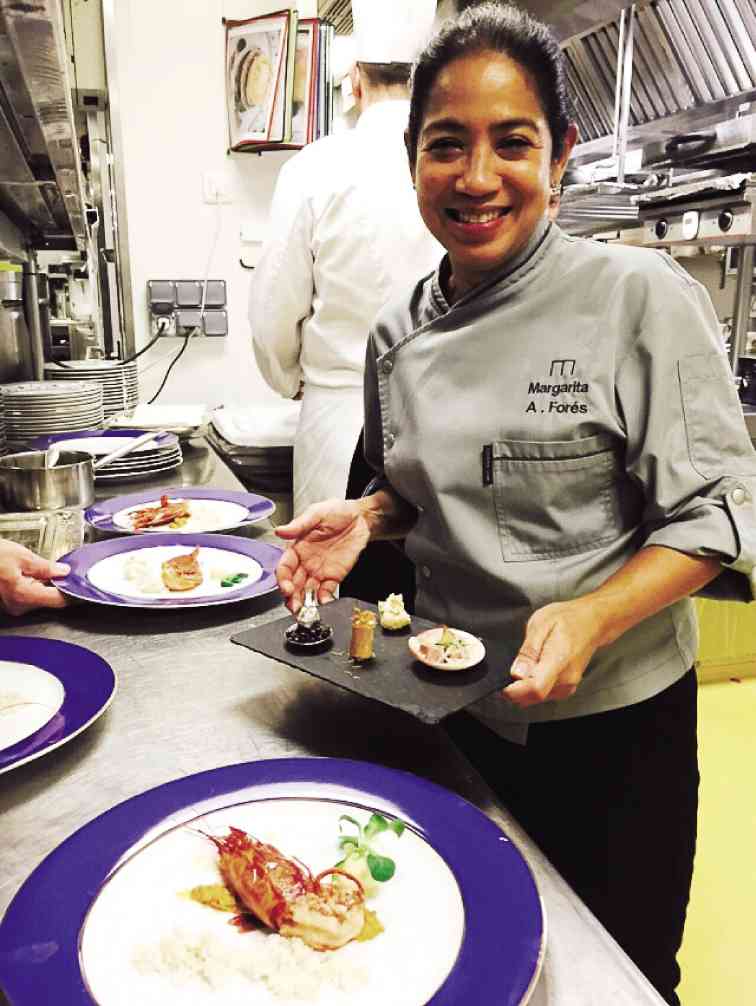 Margarita Fores takes over the kitchen of the Ritz Carlton Madrid.

Chef Segismundo was the honorary chef at Relais & Chateaux Hotel Orfila, one of the best hotels in Madrid.

She proved to Orfila dinner guests that Filipino cuisine can match the best of fine dining anywhere in the world.

She served a humble monggo soup, but used Iberico ham. For appetizers, she served chicken inasal and tinapa mousse. And, as she and Fores had given an extensive talk on kinilaw the day before—another first for Filipino chefs—she also very elegantly presented three kinds of kinilaw, including a lobster kinilaw, to dinner guests.

Unbeknownst to guests, Segismundo was being assisted by celebrities in their own right: acclaimed Philippine gourmet Tayag, and Nina Daza Puyat, who happily made the gata for dessert.

On the final evening, Fores basked in the Madrid moonlight as she took over the kitchen of the high-brow Ritz Carlton.

Fores proved that Filipino food can take on an avante garde experience, with her pass-around medley of kinilaw, barquillos with sauteed fish roe, chicharon and chive mousse, and Negrense kadyos and batwan.

As usual, Fores’ attention to detail was remarkable.

Fores made it a point to highlight products being promoted by Undersecretary Romulo-Puyat, such as adlai, a little-known indigenous crop from Bukidnon that resembles rice, which she paired with sugpo and taba ng talangka. And, knowing that adobo is the most known Filipino dish the world over, she also served adobo as an option for entrees.

It can be said now that the Philippine delegation wowed Madrid Fusion audiences and made history with the first Philippine booth. Fores and Segismundo gave especially impressive performances as they delivered the first talk by Filipino chefs during the congress, and as the first Filipinos who were invited as guest chefs of Madrid Fusion. 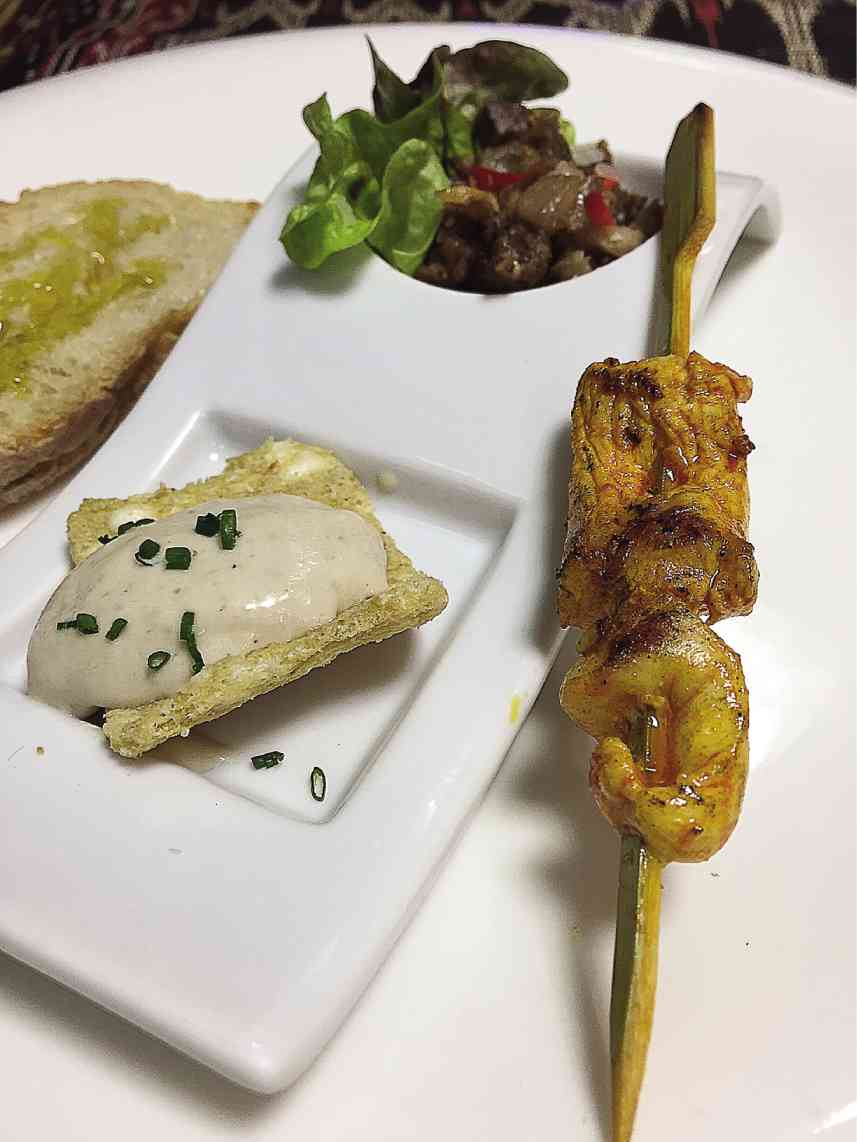 As early as the first night, many already signed up for Madrid Fusion Manila, curious to learn about Filipino food.

Congratulations to Tourism Secretary Mon Jimenez for the brilliant idea of bringing Madrid Fusion to the Philippines, and to the Economic and Commercial Office of the Embassy of Spain, the Spanish Foreign Trade Institute (ICEX), as well as the Spanish Chamber of Commerce (La Camara) led by executive director Barbara Apraiz de Encio, on their efforts to make this project a reality.

After this marvelous introduction in Spain, we must work doubly hard to make sure that Madrid Fusion Manila becomes the success we envision it to be.

Oui, PH products can have a market in France