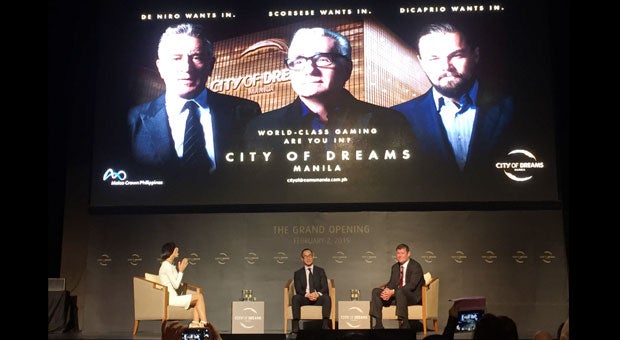 Lawrence Ho (center) co-chairman and CEO of Melco Crown Entertainment (MCE) and James Packer (right), co-chairman of MCE, talk to event host Joey Mead (left) during a press conference for the grand launch of City of Dreams Manila on Monday.

MANILA, Philippines — City of Dreams Manila, aiming to become the premier leisure and entertainment destination in the country and within the region, officially became a reality Monday when it formally opened its doors to the public.

City of Dreams Manila is a billion-dollar integrated gaming and entertainment resort strategically located at the gateway of Manila’s Entertainment City.

It combines world-class entertainment, an array of accommodation, and regional and international culinary offerings, together with designer bag shopping and a spacious and contemporary casino.

Located on a 6.2-hectare site in the cities of Pasay and Parañaque, it brings together a diverse collection of contemporary lifestyle and leisure brands including Crown, Nobu, Hyatt, Dreamworks and the Pangea Group.

“City of Dreams Manila heralds a new and very exciting chapter in the continued development of Manila and the Philippines as a leading Asian leisure and tourism destination in Asia,” Lawrence Ho, co-chairman and CEO of Melco Crown Entertainment (MCE), said in a press conference.

MCE is the company behind the City of Dreams brand.

City of Dreams Manila had a soft opening last December and has since attracted thousands of visitors. 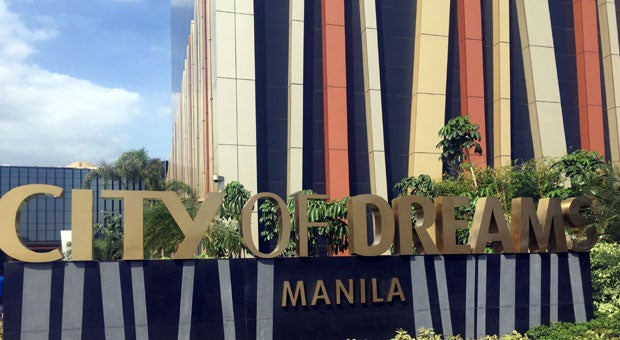 What’s inside City of Dreams Manila?