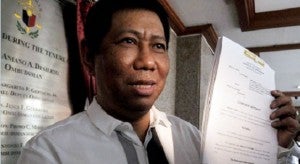 MANILA, Philippines—The two main bidders for the P1.2-billion contract to supply 23,000 precinct count optical scan (PCOS) machines to the Commission on Elections (Comelec) had been less than candid about their ownership and reach, a check on their background by members of the House committee on suffrage and electoral reforms revealed.

On questioning by Caloocan Rep. Edgar Erice, an official of Indra Sistemas SA admitted that the Spanish government was the single biggest owner of the company.

Smartmatic, on the other hand, had to concede that it was not the dominant poll equipment provider it had claimed to be when pressed on the issue by Bayan Muna Rep. Neri Colmenares.

Committee chair and Capiz Rep. Fredenil Castro meanwhile appealed for restraint among critics of the Comelec’s decision to give the diagnostics and refurbishment contract of 82,000 PCOS machines to Smartmatic.

“Unless they can substantiate their accusations, I urge these groups to exercise restraint in coming out with statements that put the Comelec in a bad light. We should not allow this thing to happen because elections are critical to our democracy,” Castro said.

In the House committee hearing Tuesday, Erice pressed Carlos Suarez, vice president of Indra Sistemas, to divulge the company’s biggest shareholder amid concerns that it was controlled by another sovereign country.

Suarez told the panel that the Sociedad Estatal de Participaciones Industriales, a diversified public entity under the Spanish Ministry of Finance and Public Administrations, was the single biggest shareholder of the company.
RELATED STORY