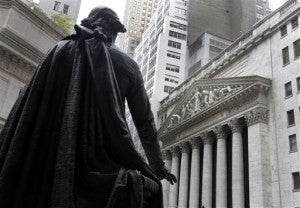 In this Oct. 2, 2014, file photo, the statue of George Washington on the steps of Federal Hall faces the facade of the New York Stock Exchange. A massive snowstorm descending on New York dulled Wall Street trade Monday but stocks ended a bit higher, helped by some positive quarterly earnings reports. AP PHOTO/RICHARD DREW

After a slow start, with some worries about the victory of the leftist Syriza party in Greek elections, stocks picked up. The Dow Jones Industrial Average finished up 6.10 points (0.03 percent) at 17,678.70.

“Trading was rather subdued because of the snow and lots of traders coming home early,” said Mace Blicksilver, director at Marblehead Asset Management.

Though the storm could lock down much of New York, markets were slated to be open for normal hours on Tuesday.

One beneficiary was the power generator maker Generac Holdings, which added 4.5 percent on expectations that the storm could boost sales.

Schlumberger (+2.0 percent) and Chevron (+1.9 percent) led major listed companies, both rising despite another fall in the price of crude oil. ExxonMobil added 1.0 percent.

Among other gainers was Twitter, adding 1.7 percent, and Pfizer, up 1.1 percent. Pfizer releases quarterly results before the market opens Tuesday.

The company announced that Bryan Stockton had resigned as chairman and chief executive. Christopher Sinclair, a Mattel board member and veteran executive of the food industry, was named chairman and interim CEO.

Bond prices fell slightly. The yield on the 10-year US Treasury rose to 1.83 percent from 1.82 percent Friday, while the 30-year moved to 2.40 percent from 2.39 percent. Bond prices and yields move inversely.