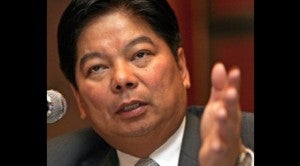 THE MERGER between the nation’s two major automated teller machine (ATM) networks, BancNet and Megalink, has been approved, paving the way for cheaper transactions for all bank clients.

Set for later this year, the milestone deal is also the first step towards the creation of a single national electronic payment platform that will reduce the need to use paper money in everyday retail transactions.

Bangko Sentral ng Pilipinas (BSP) Governor Amando M. Tetangco Jr., who announced the deal on Friday, said the merger should result in “efficiency, security, and inclusiveness in the way we settle financial transactions.”

“We’re pleased the banking community is fully engaged with us,” Tetangco said in a speech during the Annual Reception for Bankers in Manila.

The BSP brokered the deal to merge the two networks as part of an overarching plan to bring down ATM costs for consumers.

BancNet and Megalink are both owned by different consortia of banks. They were both put up to allow bank clients to use ATM machines that are not from their own bank.

These services have made it possible for virtually any bank client to withdraw money from any ATM in the country.

Lorenzo V. Tan, president of the Bankers’ Association of the Philippines (BAP), said BancNet—the bigger of the two networks—would be the surviving entity following the merger.

Major banks that control the two ATM networks agreed in principle to the merger late last year, he said. But all signatures needed for an industry-wide memorandum of agreement were secured only this month.

“We’re moving towards efficiency.… Imagine, dividing the cost over more transactions so the unit cost goes down,” said Tan, who heads Rizal Commercial Banking Corp. of the Yuchengco group. “This is something we’ve wanted for two decades.”

Officials expect the merger to be completed by October this year.

The end-game, he said, would be the creation of the so-called e-Peso platform—a unified payments system for all financial transactions in the country. This should make it easier for consumers to reduce their reliance on physical notes and coins, in favor of safer, more efficient payment methods, such as credit cards and mobile phone wallets, among others.