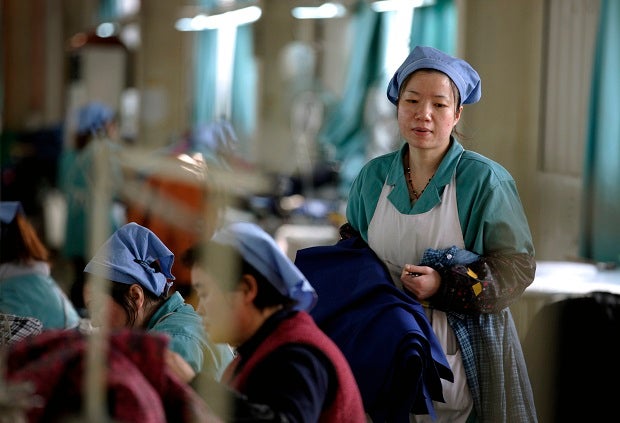 Women work at a garment factory in Huaibei in central China’s Anhui province Tuesday, Jan. 20, 2015. China’s economic growth slowed to 7.4 percent last year, the weakest expansion in more than two decades. The numbers released Tuesday, are still miles ahead of growth rates in major industrialized economies, but represent a sharp decline from double digit growth in previous years. That adds to pressure on the country’s communist leaders as they try to prevent a sharper slowdown in 2015 while overhauling the economy. AP

DAVOS, Switzerland – China’s Premier Li Keqiang sought Wednesday to allay fears over the Asian giant’s growth outlook, telling business and government elites gathered in Davos that the economy is not heading for a sharp slowdown.

A day after China posted the weakest growth in almost a quarter of a decade, Li vowed to push on with structural reforms which he said would deliver “quality growth” rather than just a high top-line figure.

“What I want to emphasize is that regional or systemic financial crises will not happen in China and that the Chinese economy will not head for a hard landing,” Li said.

He added that if China did not lose sight of its planned reforms, its economic train “will not lose speed or momentum” but will “run smoother and stronger”.

China’s economy grew by 7.4 percent in 2014, slower than the 7.7 percent in 2013, raising concerns at a time when the global economy is looking to the Asian giant to maintain growth momentum.

The full-year result, the worst since 3.8 percent recorded in 1990, comes after one of the pillars of the global economy was hit by manufacturing and trade weakness as well as declining prices for real estate, which has hammered the key property sector.

African and Latin American commodity producers in particular are watching anxiously as slackening demand in China hurts their vital exports.

But Li argued that efforts made by the government to shift China’s economy away from one that is investment and export driven towards greater consumption would ultimately make growth more sustainable for the world.

He cited the 13 million new jobs created during the year as an example, showing that “we have adopted correct and effective reforms”.

“What should we choose? For higher growth or for mid to high growth of a higher quality in the long run? The answer is obviously the latter,” he said.

“China is still a developing country, it has a long way to go in the development process,” said Li, saying that there is still room for development even in China’s urban areas.

“Domestic demand will keep improving and bring even greater development for the world,” added Li.

China will also launch new projects including railway infrastructure, said Li, adding that “efforts will be made to break monopoly to encourage foreign participation” in these plans.

“China’s development will bring more business opportunity to the world,” he said.

“Basically the People’s Bank of China is confident that the Chinese economy is still able to have relatively high growth rate,” said Zhou Xiaochuan.

“Meanwhile we emphasise more on the structural reform.

“China is slowing down a bit, but it’s becoming more sustainable. I think that’s good news,” he added.