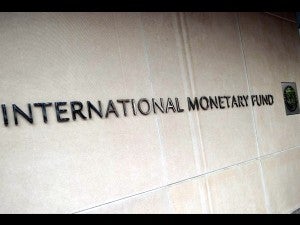 The sign on the headquarters of the International Monetary Fund is seen June 5, 2011 in Washington, DC. AFP FILE PHOTO

WASHINGTON, United States – The International Monetary Fund on Tuesday sharply cut its 2015-2016 world growth forecast of only six months ago, saying lower oil prices did not offset pervasive weaknesses around the globe.

The IMF said poorer prospects in China, Russia, the euro area and Japan will hold world growth to just 3.5 percent this year and 3.7 percent in 2016.

That was 0.3 percentage points lower than in its previous World Economic Outlook in October, and underscored the steady deterioration of the economic picture for many countries, due to sluggish investment, slowing trade and falling commodity prices.

While the United States will remain the one bright spot among major economies, Europe will continue to struggle with disinflation, and China’s growth, hit by slower export growth and a real estate slump, will drag to its slowest pace in a quarter-century.

The IMF forecast that the United States, the world’s largest economy, will expand by 3.6 percent this year, up a half-percentage point from the previous outlook.

China, the second largest economy, will expand at 6.8 percent this year — 0.3 percent slower than previously expected — and 6.3 percent in 2016, the IMF said.

The last time Chinese growth fell below seven percent was in the crunch of 1990, when it slowed to 3.8 percent.

The impact of slower Chinese growth will spill over especially to other Asian countries, the IMF said, resulting in its downgrade of their growth prospects as well.

For the eurozone and Japan, it said, “stagnation and low inflation are still concerns” requiring sustained monetary easing untraditional means to keep interest rates from rising.

In the eurozone, where the region’s central bank is expected to decide to boost stimulus this week, low oil prices and the depreciated euro are a help to growth. But it will also struggle with low levels of investment and poorer demand for the region’s exports from emerging economies.

Japan’s stimulus has not worked as well as expected, and the IMF expects it to expand just 0.6 percent this year, picking up to a still-sluggish 0.8 percent in 2016.

Russia, already pressed by sanctions over its support for secessionists in Ukraine, is particularly hurt by lower oil prices. The IMF now says the country’s economy will contract 3.0 percent this year and 1.0 percent in 2016. In October the IMF was still predicting slight growth for the country.

The world’s crisis lender warned that continued volatility in markets, partially a product of the US beginning to tighten monetary policy, pushing the dollar higher, will challenge governments and central banks around the world for some time to come.

And while the halving of crude prices is a net positive for the world, the strong dollar partially negates that effect for many oil importers using weakening currencies. And the impact of slower growth in trade, low commodity prices and market turbulence will all but erase the gains from cheap oil.

“New factors supporting growth — lower oil prices, but also depreciation of euro and yen — are more than offset by persistent negative forces, including the lingering legacies of the crisis and lower potential growth in many countries,” says Olivier Blanchard, the IMF’s chief economist.

The IMF stressed that countries need to persist in restructuring, reform and investment despite the weaker conditions.

“Raising actual and potential output is a policy priority in most economies… There is an urgent need for structural reforms in many economies, advanced and emerging market alike,” even as they face different choices and needs in their overall economic policies.

It included in that prescription the need for governments to take advantage of lower oil prices to cut subsidies to strengthen their budgets for the long term.