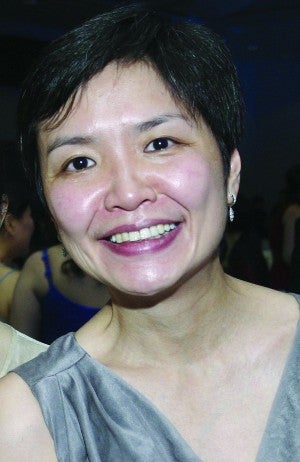 ROBINA Y. Gokongwei-Pe knew as early as five years old that she was destined to be in the retail sector.
The eldest of the six children of taipan John Gokongwei Jr., founder of the Gokongwei group of companies with interests in retail, banking, food and beverage manufacturing and real estate developments, shared that her father already told her at that tender age that she would one day need to help in the family business.
“So I did not look anywhere else,” said Gokongwei-Pe, president and chief operating officer of Robinsons Retail Holdings Inc., which owns and operates the Robinsons Department Store, Robinsons Supermarket, Handyman, True Value, Robinsons Specialty Stores, Robinsons Appliances, Toys R Us and Saizen by Daiso Japan.
Thus, while she has a degree in Journalism from New York University and had written for the sports pages of the Philippine Collegian, the campus paper of the University of the Philippines, she immediately entered the retail world as soon as she graduated in the 1980s.
Gokongwei-Pe, whose first name is a shortened version of her father’s second name, Robinson, said she was assigned to the retail business when it was still just a single Robinsons Department Store in Manila.
She first worked as a receiving clerk at the warehouse.
“Our systems were so outmoded that, when the deliveries came in, I had to count each piece one by one, whether there were 200 pieces of underwear or 200 sets of drinking glasses. If I didn’t count correctly, I had to pay for it. Luckily, I counted everything correctly. It was during that time that I saw how small business owners had to drive their own van to make their own deliveries,” said the 53-year-old Gokongwei-Pe.
Gokongwei-Pe took on more responsibility as the Gokongweis’ retail footprint grew.
She is the first to say that the retail sector is not as glamorous as people may be led to believe by going to the malls and shops.
Far from it.
“Retail is challenging and there is no such thing as an off day, but it’s always nice to see lines at the cash registers, or rather point-of-sale terminals,” said Gokongwei-Pe, who is married to corporate lawyer Perry Pe, with whom she has a son.
The former publisher of the Manila Times, which the family had sold when it ran into trouble with the administration of former President Joseph Estrada, said the belief that retail was glamorous was one of the biggest misconceptions about the industry—one of the biggest contributors to the country’s gross domestic product.
“The reality is that a lot of complex work is done at the back before you could get that beautiful product on the floor. And then, convincing customers that it’s a beautiful product when they think it’s not another challenge,” said Gokongwei-Pe, who is also director of Robinsons Land Corp.
There is always the fear among retail companies that the product that everybody thought people would like “turns out to be a dud,” she said.
Thus, she gets the most fulfillment from “seeing someone wearing a dress that you sold at your store.”
Enticing consumers to patronize the different formats under Robinsons Retail will become even more of a challenge given the integration of the member-economies of the Association of Southeast Asian Nations into a single economic community.
But Gokongwei-Pe stressed that the group, which started in 1980 with the opening of the first department store in Metro Manila, was ready.
“I like to believe that our group thrives in competition, and so we are ready. In the end, this is good for the Filipino consumer,” she said.
Robinsons Retail, which recorded a 33.3-percent increase in net income to P2.3 billion in the first nine months of 2014 from the previous year, invested, for example, in analytics to track both fast and slow moving items, as well as orders and promotions to make decision-making easier and grounded on reality.
The group also invests continuously in enhancing the skills of the staff members, whom she said had been instrumental in helping the company succeed and grow to become the second largest multiformat retailer in the Philippines.
“There are no kings and queens here,” said Gokongwei-Pe, who always takes to heart the advice from her mother “not to be pompous.”
This year, Robinsons Retail plans to invest in more stores and new formats.
While she knows that not every investment of Robinsons will work out as expected, these are moves that the company just needs to make.
As her father always says: “If you make a mistake, try again … It is better than not having attempted to do anything at all.”