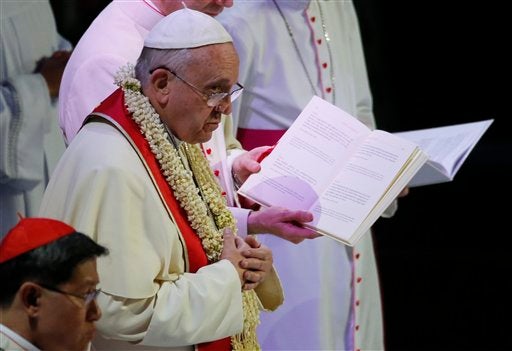 Pope Francis attends a gathering of thousands of the faithful at the Mall of Asia arena in Manila, Philippines, Friday, Jan. 16, 2015.  AP

MANILA, Philippines—The smashing reception that Filipinos are giving Pope Francis during his four-day visit will have a minimal impact in monetary terms but will provide maximum exposure for the country’s bustling economy.

“I don’t think there is a clear economic boost brought about by the papal visit. What is good is that the Philippines gets into the news for the right reasons. A successful and peaceful visit seen globally is good for us. It also reminds investors about our country,” said stockbroker Wilson Sy who manages the Philequity Fund, one of the best-performing mutual funds in the country.

Sy cited the Philippine Stock Exchange (PSE) Index, which notched an all-time record close of 7,490.88 on Wednesday—prompting analysts to call it a “papal rally”—as proof of the positive vibes the country was getting from local and foreign investors.

“The Philippines is a clear beneficiary of plunging crude oil prices. The PSE index reaching all-time highs while global stock markets are dropping is a testament to this,” said Sy.

Interior Secretary Mar Roxas agreed that the immediate gains from money inflows was minimal but the economic potential would be enormous.

“The Philippines is able to project itself as a modern, stable and safe place where rules, particularly for the common good are firmly observed. These are the same qualities that ‘money’ looks for such as in Singapore and Hong Kong. The more long-term the money, such as factories and foreign direct investments which is the kind of money that creates quality good-paying jobs and thus more desirable, the more important are these qualities. Short-term money such as portfolio or stock market or currency plays can easily fly out so these qualities are less critical,” said Roxas.

Enrique K. Razon Jr., the chair and CEO of International Container Terminal Services Inc. , said the successful visit of the Pope would shore up the country’s profile overseas and further boost the confidence of Filipinos.

In a recent report, the World Bank (WB) gave a glowing review of the Philippine economy—unemployment falling to its lowest in 10 years and income of the bottom 20 percent of the population growing faster at 10 percent compared to 2.4 percent for the upper 80 percent.

Although it adjusted its growth forecasts for the Philippines to 6 percent in 2014 due to low government spending and poor agriculture output, the WB still expected the economy to grow at higher 6.5 percent this year.

“The country can even grow beyond 6.5 percent if the government can fully utilize its budget as planned and accelerate reforms. If growth is sustained at 6 percent per year and the current rate at which growth reduces poverty is maintained, poverty could be eradicated within a single generation,” said Rogier van den Brink, the bank’s lead economist for the Philippines.

Inquirer columnist Cielito Habito, a former socio-economic planning secretary, pointed out that an average of 1.25 million new jobs have been created in the last three quarters, mostly in construction, hotel and restaurants, manufacturing and agriculture.

“I see these numbers reflecting general improvement in quality of employment, new vigor in the tourism and manufacturing sectors, both of which are important drivers of more inclusive growth, and a beginning trend toward broader-based, more widely shared economic growth,” Habito wrote in his column.

Read Next
Governance reforms pushed to sustain growth
EDITORS' PICK
Japan brings back virus restrictions over Omicron surge
Gear up and get ready to play with Yamaha Mio Gear
Over 3 Million worth of prizes to be won at Smart Padala’s SENDali Manalo Promo!
Uproar over no vax, no ride policy: Maybe it’s time for gov’t to say sorry—Bello
97% of COVID-19 beds at PGH currently occupied
Acer starts the year off strong with the Aspire Vero National Geographic Edition
MOST READ
1Sambayan names 7 aspirants in its 2022 Senate lineup
Emma Stone calls Andrew Garfield a ‘jerk’ after he ‘lied’ about his ‘Spider-Man: No Way Home’ appearance
Guevarra to Acosta: Obey rules on unvaccinated
PH to import 60,000 tons of fish to cover shortage
Don't miss out on the latest news and information.