Work is sweeter the 2nd time around for Danish ambassador 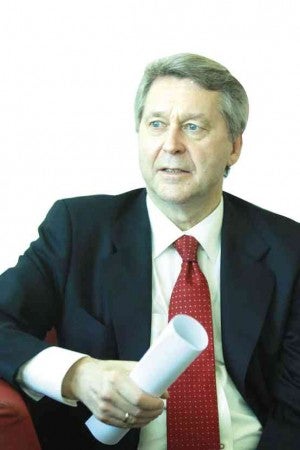 Ambassador Jan Top Christensen first came to the Philippines in 1987.

MANILA, Philippines–The Ambassador of Denmark to the Philippines is no stranger to this country.

In the late 1980s, Jan Top Christensen worked for the United Nations and headed a Vietnamese refugee camp in Puerto Princesa, Palawan, where he stayed for a good three years.

Christensen recalled living in the provincial capitol where there weren’t any hotels—a far cry from the scene today when hotels of all classifications are ready to welcome tourists of varying purchasing power.

Some 25 years later, the Danish Ambassador is raring to go back to Palawan.

“When I came to Palawan in 1987, there were no rooms and the local markets were those in huts like you see in small provincial towns. But now [Palawan] has huge malls and the airport is being expanded,” Christensen said.

“Coming back after 25 years, I can see tremendous change. So it’s very interesting to compare [things then and now]. I will go back to Palawan as soon as the embassy’s up and running,” he added.

Christensen, who was appointed Danish Ambassador to the Philippines effective August 1 last year and is in the midst of setting up a new home for the embassy, has declared his strong faith in the growth prospects of the Philippines, sharing the same bullishness that his home country has for the Philippines.

This is why Denmark has decided to reopen its embassy in the Philippines, 12 years after the Danish government had shut down its office here in 2002.

This move was largely due to the country’s sustained economic growth and the gains achieved from the political reforms implemented under the Aquino administration, according to Christensen.

“We’re opening in countries where we see prospects and that definitely includes the Philippines, which has very important political reforms [implemented] over the last four years. You have a growing economy, very interesting growth rates so it was decided late last year to also reopen [the embassy] here,” Christensen explained.

The new Danish Embassy in Bonifacio Global City is set to be be inaugurated and officially opened on Jan. 22 this year.

Alongside the embassy opening will be the arrival of a trade delegation, composed of representatives from about 17 to 18 Danish companies who will be seeking to tap prospective deals and partnerships with local companies in the areas of food and agriculture; energy, water and environment; and pharmaceutical and health, Christensen disclosed.

Christensen explained that the decision to close Denmark’s embassy in the Philippines in 2002, along with nine other embassies across the globe, was due to certain financial constraints faced by his country then.

The situation in the Philippines at that time was also “quite different economically and politically.”

Within the last four years however, the Philippines has made significant headway in its reform agenda as reflected in the country’s rankings in global indexes.

One example was the country’s standing in the Transparency Index, where the Philippines improved its standing by 49 notches to rank 85th in the 2014 edition from only 134th in 2010.

The Danish ambassador also pointed out the achievements made in the Bangsamoro peace process, noting that it was “very important for the Philippines to have sustainable genuine peace in the Muslim areas, because otherwise, it’s disturbing the economy and therefore preventing the growth of the Philippine economy.”

On the economic side, the government has taken significant steps that have helped move forward the country’s ranking in World Bank’s Ease of Doing Business Index, and the Philippines, according to Christensen, has “moved forward substantially on this index.”

“So these [developments] are very important, and absorbed outside not only by Denmark but also by other countries. And [these] made us decide to come back because we see positive developments in this country. In the 1960s, the Philippines was seen as bright shining star in Southeast Asia, so you have had the potential for decades. You had the natural resources, the human capital. Unfortunately, you had a corrupt system that destroyed the country politically and economically for decades,” Christensen explained.

“Now, we definitely see a new situation. We saw a brief period [of economic gains] with [former President Fidel V.] Ramos in the early 1990s. He took a number of steps, but unfortunately he was followed by inadequate presidents that couldn’t follow up on that and went back to the old methods. For me, this country for sure has the potential. I’m very optimistic in behalf of the Philippines,” he noted.

Danish companies and products already have a strong presence in the country, with the likes of the Maersk Group, engaged in global trade, shipping and energy; Lindberg, which has a manufacturing facility for frames for eyeglasses in the country; Sonion, which invested only last year some $30 million to put up a facility that could manufacture balanced armature receivers and high-end microphones, modules for hearing instruments, and high precision tools for plastic molding; and Vestas Wind Systems A/S, a manufacturer, seller, installer, and servicer of wind turbines that has Energy Development Corp. as its client in the country.

These companies, according to Christensen, either have or are already putting up their respective shared services facilities in the Philippines to cater to back office operations regionally or globally. Other Danish companies that have made their presence felt in the Philippines are in such areas as pharmaceuticals, energy efficiency, dairy products and watches.

According to the Danish ambassador, Denmark is now targeting to double its exports to the country within five years’ time and tap the prospective investment opportunities here.

“[We] will be heavily involved in what we call in the broad sense economic diplomacy, [and] also [in] servicing and assisting Danish companies to understand the market, and help them to find the right partners and to get in touch with the right authorities [here],” he said.

Apart from the delegation arriving this month, another important delegation will be coming on the last day of February and will be here for eight days, with Denmark’s Speaker of the Parliament serving as head of the delegation. This group is set to look into political and economic developments in the country.

“Then I’m working eagerly on having your President Aquino visiting Denmark before the end of his term. That is my ambition. [It] would be, I believe, interesting for him to visit Denmark and maybe [also] the two other Scandinavian countries Sweden and Norway. It will give high profile for the Philippines in these countries and, at the same time, help profile those three countries here,” he added.

Christensen has further committed to bring as many high-level Danish delegations coming here as possible and get local Cabinet officials to visit Denmark as well. He disclosed that he had already earlier invited Energy Secretary Carlos Jericho L. Petilla to visit Denmark to look at the advanced energy-related technologies that they have to offer.

The Philippines was Denmark’s 66th-largest export market for goods in 2013. As of end-August 2014, the value of Danish goods exported to the country stood at 939 million Danish krones (roughly P6.8 billion), while imports from the Philippines reached only 165 million krones (about P1.2 billion).