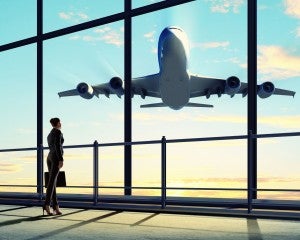 MANILA, Philippines–Expect airline ticket prices to ease as early as next week as the government scraps the fuel surcharge on domestic and international flights operating in the Philippines because of the sharp decline in global crude oil prices.

Civil Aeronautics Board (CAB) executive director Carmelo Arcilla said Wednesday that the resolution to remove the fuel surcharge was signed Wednesday. He said that airlines would be served with the order starting Thursday and will be effective “immediately.”

The effect on the ticket price is expected to vary. The fuel surcharge runs from a few hundred pesos for domestic flights to several hundreds of US dollars for long-haul international flights.

“It should be safe to say that carriers should have removed the surcharge by next Monday,” Arcilla said, taking into account the time the order is given to carriers and the upcoming weekend. The order will not affect tickets that have been purchased before airlines have been formally notified.

In line with this, the CAB published Resolution No. 79 (BM 10-12-22-2014), which also noted that oil prices have declined 25 percent from June to November. Crude oil this week fell below $50 per barrel, extending the drop to about 50 percent, with some forecasts pointing to prolonged weakness in the commodity’s value as global demand slows.

The fuel surcharge is typically granted by the government to help airlines recover part of volatile fuel costs, usually an airline’s single-biggest operating expense. But this should no longer apply when oil prices are falling, Arcilla said.

“With the substantial and continuous decrease of fuel prices in the world market, the board has deemed it appropriate to compel airiness to discontinue their imposition of fuel surcharge,” part of the CAB resolution read.

The resolution specifically removes “the authority of domestic airlines and international airlines operating to and from the Philippines to impose fuel surcharges on international and domestic flights,” it added.

Some airlines have indicated they would seek reconsideration, Arcilla said, although he did not name these.

“As far as the board is concerned, it will be given effect,” he said.

In its resolution, the CAB cited other carriers that have either removed or reduced their fuel surcharge. It said Malaysia Airlines had lifted the fuel surcharge since July 2013 while Japan Airlines, Hong Kong Dragon and Cathay Pacific reduced the surcharge last year.

Other carriers argued that fluctuating costs were not the only factor as jet fuel prices are sometimes covered by contracts—meaning carriers have agreed to pay a fixed price for a certain period of time.

Domestic carriers like Philippine Airlines, Cebu Pacific and the local units of AirAsia of Malaysia did not immediately respond to requests for comment.