Meralco power bills to go down in January due to cheaper coal, normal supply 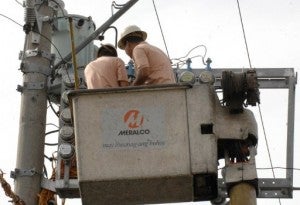 MANILA, Philippines – Customers of the Manila Electric Co. can expect their power bills to go down in January as electricity rates fell by a total of 19 centavos per kilowatt-hour due largely to the lower cost of coal and the normal supply situation seen in December.

This means that households consuming 200 kilowatts per hour (kWh) in a month will see a reduction of P38.81 in their power bills, while those who consume 300 kWh will have to pay about P58.22 less this month, according to Lawrence S. Fernandez, Meralco assistant vice president and head of utility economics.

This will be the third straight month that power rates have gone down, with the generation charge, accounting for roughly 60 percent an electricity bill, currently at its lowest level since October 2013.

Meralco, however, admitted this early that this series of lower generation charges over the past few months may be difficult to sustain, especially as warmer temperatures set in, coinciding with the shutdown of the Malampaya gas facility sometime from March to April this year.

In a statement issued Wednesday, Meralco explained that the generation charge for January decreased by 22 centavos to P4.72 per kWh this year from P4.94 per kWh in December.

“The reduction in the generation charge was mainly driven by lower charges from the plants under the Power Supply Agreements (PSAs), which registered a reduction of 73 centavos per kWh due to the normal operations of the power plants during the December supply month and the lower cost of fuel. Coal prices of some suppliers went down by almost $2 per metric ton,” Meralco explained.

The lower PSA charges, the distribution utility added, had more than offset increased charges from Independent Power Producers (IPPs) and the Wholesale Electricity Spot Market (WESM), whose cost of power rose by 24 centavos and P1.68 per kWh, respectively.

According to Meralco, the higher WESM charges were primarily due to the additional payment and compensation to power generators affected by the administered and secondary price cap implementation for the February to July 2014 supply months.

For the December supply month, Meralco had obtained 52 percent of its electricity requirements from the PSAs; 45 percent from the IPPs; and only 3 percent from WESM.

Contributing also to the overall downward adjustment in the bills to households was the P0.026 decrease in taxes and P0.011 cumulative decrease in the system loss charge and subsidies. Transmission charges, on the other hand, rose by P0.062 per kWh.

Meralco stressed anew that it has not been earning from the pass-through charges, such as the generation and transmission charges. Payment for the generation charge goes to the power suppliers such as the plants selling to Meralco through the WESM and under the PSAs, as well as the IPPs.

Payment for the transmission charge, meanwhile, goes to the National Grid Corporation of the Philippines (NGCP). Of the total bill, only the distribution, supply and metering charges accrue to Meralco.

To further save on energy costs, those planning to buy new appliances are urged to consider getting the inverter types, especially for washing machines, air conditioners, and refrigerators. In the case of refrigerators, for example, consumers could save up to P211 per month with the inverter type compared to the conventional refrigerator, Meralco said.

Although inverter types are more expensive to purchase, in the long run, customers may save on them because they are more energy efficient, according to Meralco.