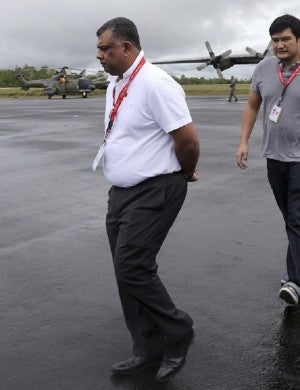 In this Wednesday, Dec. 31, 2014 photo, AirAsia Group CEO Tony Fernandes walks upon his arrival to visit the command center of the search operation for the victims of AirAsia Flight 8501 at the airport in Pangkalan Bun, Indonesia. From the highly visible compassion shown by Fernandes to details such as changing the airline’s bright red logo to a somber gray online, experts say the Malaysia-based budget carrier’s initial response to the tragedy is a textbook example of how to communicate in a crisis. AP

SURABAYA, Indonesia – If AirAsia bounces back from its first fatal disaster, much of the credit will go to its effusive founder Tony Fernandes and a well-oiled communications machine.

From the highly visible compassion shown by Fernandes to details such as changing the airline’s bright red logo to a somber gray online, experts say the Malaysia-based budget carrier’s initial response to the tragedy is a textbook example of how to communicate in a crisis.

AirAsia Flight 8501 crashed into the Java Sea on Sunday with 162 people on board. More than two dozen bodies have been recovered so far. It was the first deadly air accident for the 13-year-old carrier, which has made air travel affordable for tens of millions of people in fast-growing Southeast Asia.

AirAsia’s handling of the disaster has drawn favorable comparisons with the bungled communications by Malaysia Airlines after Flight 370 disappeared March 8. But experts say the situations faced by the two airlines are so different it’s unfair to liken them.

For one, it soon became apparent the AirAsia jet had crashed, while the location of the Malaysia Airlines plane has been a mystery since it vanished a short time into its flight from Kuala Lumpur to Beijing. As a bureaucratic, state-owned company, Malaysia Airlines faced constraints that AirAsia didn’t and which resulted in its often lumbering and scripted communications.

A fatal crash is typically a make-or-break event for an airline. Irrespective of the cause, the professionalism and authenticity of the airline’s response are crucial for its reputation to recover. After nearly a century of commercial aviation, airlines have accumulated a trove of experience and knowledge about how to respond to disasters, though the lessons are not always learned or applied.

“He is looking after the priorities — the families. He is showing a lot of empathy. He is using many channels to put that across.”

Since Sunday, Fernandes has been constantly in the spotlight, apologizing for the loss of life. An active Twitter user with nearly a million followers, he quickly took to social media to express shock and sympathy. On television, he has not shied away from answering questions while avoiding speculation about the cause of the crash, which occurred during bad weather.

“I apologize profusely for what they are going through. I am the leader of this company and I have to take responsibility,” Fernandes said at a televised news conference.

Within hours of the flight disappearing from radar after taking off from Surabaya in Indonesia, he was in the city to meet with families of the passengers and crew. At the same time, the airline and its Indonesian unit in particular were issuing regular statements about the known facts in several languages and had set up a hotline for relatives.

If AirAsia continues in that vein, “it is probably going to prevent a crisis from turning into a reputational train wreck,” Sapriel said.

In the first sign of a backlash from the Indonesian government, the Transport Ministry on Friday grounded AirAsia flights from Surabaya to Singapore, saying the airline did not have a permit to fly on Sundays, the day of the crash. AirAsia said it was reviewing the suspension.

Fernandes “is the boss and everyone knows it,” said Maybank aviation analyst Mohshin Aziz.

“The human factor is definitely very genuine, from the words he chooses to the facial expression.”

Many family members praised AirAsia for being swift in responding to their needs. The airline was quick to arrange hotel accommodation and transport for those from outside Surabaya.

“AirAsia has taken good care of us from day one,” said Ronny Tanubun, 37, who lost his 13-year-old nephew. “This is a tragedy, what can we do? It’s fated. It can happen to any airline. I am not afraid of flying with AirAsia,” he said at the family crisis center at the Surabaya police headquarters.

“They are not telling us anything about the latest development. We have to find out by watching TV,” said Masykur, 52, who has four family members on the plane.

Even as experts praise AirAsia for its initial handling of the situation, they caution there is a long way to go before it can put the disaster behind it. Its share price is down 8 percent since the crash, wiping nearly $200 million from the airline’s stock market value.

There is likely to be a falloff in passengers from Indonesia, where most of the victims are from. It is an important market for AirAsia, the biggest economy in Southeast Asia and the world’s fourth-most populous nation.

The accident investigation report will be of paramount importance for the families of those on board and the airline.

If the investigation shows the airline is in some way to blame, it will be crucial for AirAsia to fully acknowledge that and convincingly show it is taking action to ensure that type of accident can never happen again, said Henry Harteveldt, founder of Atmosphere Research.

“AirAsia will find that while it is tough to get the message across, people will appreciate their candor,” he said.