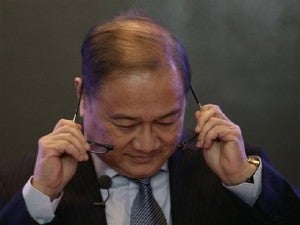 PLDT chair Manuel V. Pangilinan told reporters late Thursday that the telco was no longer interested nor was in talks with Alphaland Corp. for the purchase of the latter’s office building in Makati City.

Since PLDT is considering a new office location south of Metro Manila as a more viable option, Pangilinan said the company was in talks with the Gotianun-led property group on a potential site.

When asked if PLDT could also consider the soon-to-rise Vista City of Villar-led Vista Land and Landscapes Inc., Pangilinan replied that discussions on a potential new office site were not limited to the Filinvest group anyway.

Pangilinan said PLDT was not in a rush to move to a new headquarters as the company would first have to consult its employees to get feedback on the location. “Some live up north, so they could get stuck in traffic when travelling down south,” he noted.

The PLDT chief nonetheless said that a campus-style headquarters similar to the soon-to-rise second Apple Campus of the US tech giant augured well for telco firms.

“I would prefer a campus-style kind of headquarters. If you really dig deep into the telecoms world and even the media world, it is rapidly changing. The Internet is really affecting things. It will affect how people work and how they interact at work,” Pangilinan said.

“The traditional model is you functionalize [offices]—you assign different areas for finance, marketing, sales, admin departments. That’s why you build   buildings and assign floors [for each department], but the interaction is different. Apple’s headquarters building is shaped like a big pie; it’s a circular thing. I guess they determined that’s the way they want to interact at work and force people to dialogue with each other and work with each other—pretty much open and free,” Pangilinan further explained.

Meanwhile, Pangilinan echoed earlier pronouncements of PLDT president Napoleon L. Nazareno that the company “will meet the revised guidance [profit] for 2014”—a lower P37.5 billion from the previous goal of P39.5 billion.

ADVERTISEMENT
Read Next
Jollibee Foods Corp. to operate Dunkin’ Donuts network in China
EDITORS' PICK
IATF to LGUs: Issue ordinances vs attacks on frontliners, COVID-19 patients
Diokno to Duterte: OK to make fun of buck tooth, but focus on people’s needs first
10 Filipinos positive for COVID-19 in UK, 7 in Ireland — envoy
Nograles: Cabinet members to donate 75% of monthly salary to aid COVID-19 fight
Robredo spox thanks Duterte for defending VP’s efforts vs COVID-19
Quick chat with Nicole Andersson: ‘You really don’t need much to be happy’
MOST READ
Coronavirus hotbed Rizal to shut borders on April 6
Sotto on Isko Moreno’s call: We do our job without the media following our every move
ADB warns PH against prolonged lockdown
Gov’t mulling quarantine period extension of 15-20 more days
Don't miss out on the latest news and information.