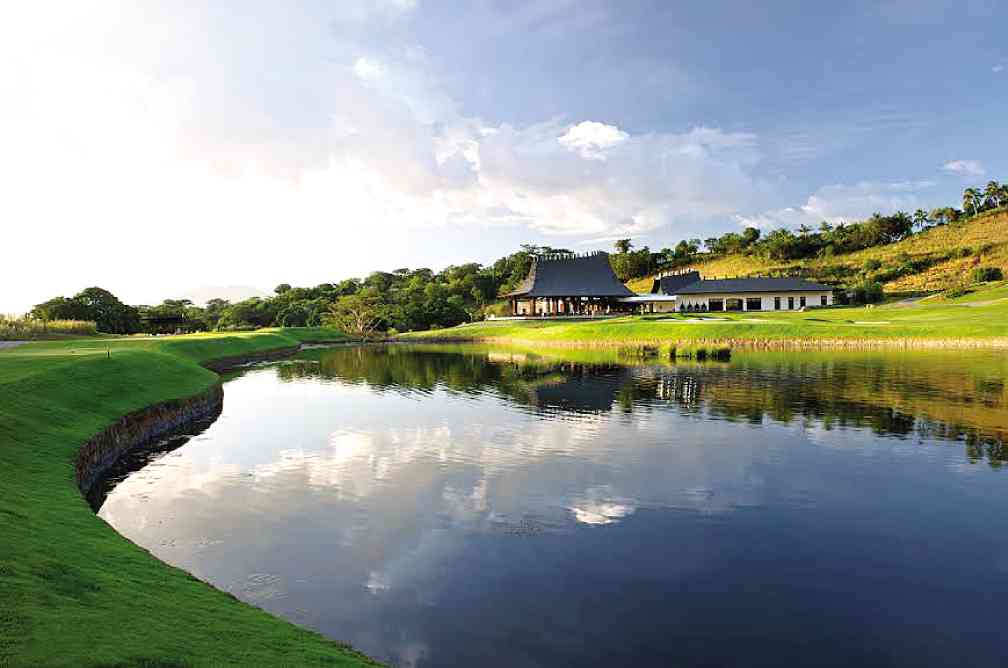 The golf course, which is bruited about as the country’s first truly world-class course, is now the “Best New Golf Course in Asia.” The accolade was given to Anvaya Cove golf course during the Asian Golf Awards hosted by Asian Golf Monthly, a member of the Asia Pacific Golf Group, one of Asia’s premier organizations of golf enthusiasts.

Asian Golf Awards is widely regarded as the “Oscars” of the golf industry in Asia Pacific.. Two records—the number of nominees and the number of voters—were broken this year. Approximately 69,000 golfers all over Asia Pacific voted in this year’s award program.

“We are very honored and proud to have placed the Philippines on the international golf map with this achievement by Anvaya Cove,” said Jose Juan Jugo, head of Ayala Land Premier.

The 18-hole golf course covers 82 hectares and is playable all year long. It was designed by Kevin Ramsey, partner and principal of Golfplan, the golf course architecture group based in Sta. Rosa, California. The group is behind the world’s beautiful award-winning golf courses that include the Royal Brunei Golf Club in Jerudong Park, Brunei; Eagle Ridge Golf Club in California; and The Club at Nine Bridges in Jeju Island, South Korea.

Holes 1-9, called Mountain Nine, are situated on or near the peaks and ridges of the development and offer majestic vistas of the sea and the Zambales and Bataan mountain ranges. Otherwise known as Seaside Nine, holes 10-18 are reminiscent of popular seaside courses and combine panoramic sea views with those of the forest reserves. Hole 13, called Reflection, stands out. It has peninsular green at 130 meters above the ocean.

According to Jugo, Ayala Land Premier to date has sold over 80 percent of its property or almost P9 billion worth of inventory in Anvaya Cove, including beach and golf club shares.

Jugo said: “Since its launch in 2005, Anvaya Cove has had a warm and steady reception from the domestic and international second-home market. With the launch of the beach club in 2008 and the golf club in December 2013, the pace of our sales has even increased further.”

He added, “This year, we have seen a 58 percent year-on-year growth spike in sales from real estate and golf club shares worth P400 million, attributed to both domestic and foreign investors.” Anvaya Cove Golf and Sports Club has sold more than 750 shares.

Anvaya Cove has a coastline that spans 3.5 kilometers in two private coves. Its highest elevation is 130 meters above sea level.

Accessibility to Anvaya Cove is not a problem. To reach this self-contained community, one can take the North Luzon Expressway through the San Fernando Exit, the Subic-Clark-Tarlac Expressway and Angeles Exit. The Subic Freeport Zone is 25 minutes away from Anvaya Cove.

Catering to the varied needs of its clients, the exclusive community offers a variety of living space options. It is divided into distinct neighborhoods of low-rise condominiums and maisonettes, the Seabreeze Verandas and Seascape Ridge, respectively, ranging from P6 to P25 million; and 400- to 1,500-square-meter lots which start at P5 million or P12,000 per square meter, where residents can build their own houses.

Lots are classified according to their location. The Vistas at Mango Grove lots are on the Bataan ridge and has picturesque views of the sea and the mountains at 65-95 meters above sea level. On the northern section of the development are the Woodridge Hills lots sitting on rolling hills. Horizon Point lots are located in the southwestern ridge with a backdrop of the forest. Narra Grove lots sit 100 to 120 meters above sea level, offer breathtaking horizon views, and are nearest to the Anvaya Cove main gate. To date, 58 homes have been built and an additional 17 will be completed in 2015.

Recently launched in Anvaya Cove is the very limited 29-lot Fairway Crest neighborhood, which overlooks the golf course and have 180-degree views of the sea. Over 80 percent of lots in Fairway Crest have been taken up since its launch. The neighborhood will be completed in 2016.

The name was derived from the Sanskrit word “anvaya” that means family, and the development reflects this theme through amenities that cater to adults, children and even the serious athlete. Anvaya Cove is envisioned to be a place where families will be brought closer together.

Anvaya Cove’s masterplan is centered around a vigorous and progressive environmental sustainability program to maintain its beauty and lushness. Endemic flora and fauna were used in and around Anvaya Cove including the golf course to lessen water and maintenance requirements. Neighborhoods, amenities and roads were designed and built to merge and flow well with the natural landscape and contours of the mountains and the coves.

Anvaya Cove structures use locally available materials and passive solar features. As a private sector representative in Morong’s coastal resource management planning for Bataan, Anvaya Cove contributes to the enhancement of the surrounding marine and terrestrial ecosystem. Together with the Department of Environmental and Natural Resources, Anvaya protects and monitor nesting of Olive Ridley Sea Turtles.

Jugo said: “No residential leisure development has come close to Anvaya Cove. And we plan to raise this lead further by consistently improving on our product offerings while maintaining a gold standard in our beach and golf club services as we gear up to launch more residential projects and amenities until full development completion in 15 to 20 years.”