MANILA, Philippines — Transportation officials have rejected an offer by the Metro Rail Transit Holdings II (MRTH II) to drop the arbitration case against the government, saying the defendant wants to see the case to its logical end.

“In a negotiated contract, there’s a risk that one is going to complain there was something going against the law. When you have arbitration, there is a court… that [would declare] everything was okay, everything was done in accordance with a process,’’ Transportation Undersecretary Jose Perpetuo Lotilla said Wednesday. 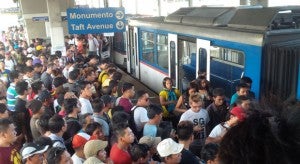 Besides, if the government agreed to the termination of the arbitration case, the equity value buyout (Evbo) of MRT 3 under the build-lease-transfer (BLT) contract with MRT Corp. (MRTC) would not be possible, Lotilla said. “Evbo is a remedy under the BLT agreement. We’d rather follow that path. It’s the uncharted path.’’

In Wednesday’s Senate hearing on the problems plaguing the MRT, Metro Global Holdings Corp. (MGHC) chair Robert John Sobrepeña broached the idea of dropping the arbitration case since the “breach’’ had been cured.

MGHC is one of the shareholders of MRTH II, parent company of MRTC.

Sen. Grace Poe, who presided over the hearing, said dropping the arbitration case would be one less problem for both parties.

MRTC filed an arbitration case against the DoTC in the Singapore-based International Chamber of Commerce-Court of Arbitration for violating the BLT agreement, which remains valid until 2025. The case stemmed from the unpaid rentals by the DoTC.

MRTC also filed another case over the amount that the government should pay MRTC after they agreed on a buyout plan.

After the hearing, Lotilla said he believed that Sobrepeña was pushing for arbitration because he wanted a “consensual buyout.’’

Under such a scheme, the terms would have to be negotiated by the parties, whereas EVBO provided a formula for the buyout, he said.

“That also comes with the risk of being accused of being paid to agree to the negotiated buyout,’’ he said in an interview Wednesday.

Responding to the failing grade that MRT 3 got from commuters, Lotilla said the degradation did not happen overnight but throughout its entire life.

“We will do everything necessary to fix it,” he said.