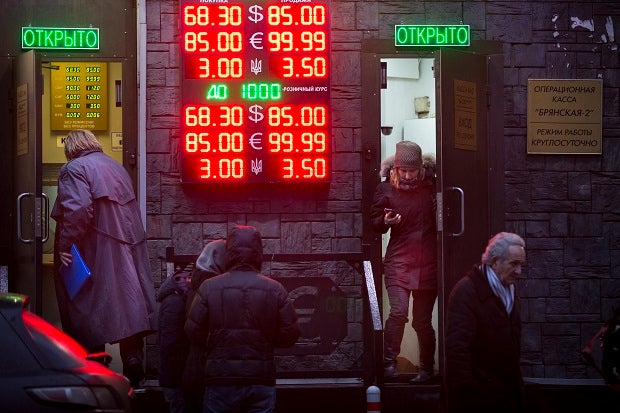 The Russian currency crashed to unprecedented lows Tuesday trading at 80 rubles to the dollar and 100 to the euro, testing Vladimir Putin’s ability to ride out both the economic storm and his clash with the West. AP

MOSCOW, Russia – The Russian currency crashed to unprecedented lows Tuesday trading at 80 rubles to the dollar and 100 to the euro, testing Vladimir Putin’s ability to ride out both the economic storm and his clash with the West.

Moscow’s midnight move to raise interest rates to 17 percent failed to arrest the collapse of the currency. To make matters worse, the White House announced that US President Barack Obama plans to approve tightening sanctions against Moscow.

Western sanctions over the Kremlin’s support for the separatist insurgency in Ukraine have all but closed access to foreign borrowing for Russia and contributed to the crisis.

The almost halving of crude oil prices in the past six month has also been devastating for Russia’s economy, which is heavily dependent on export of natural resources. Even the central bank warned of a five-percent contraction if they remain at the current level.

After dropping by around 20 percent during the day, the ruble bounced back slightly in late afternoon trade to around 71 against the dollar and over 88 against the euro.

The worsening economic outlook and looming recession present a serious challenge for Putin, whose pact with voters has been based on years of economic stability and relative prosperity — underpinned by high oil prices.

Some observers said the reasons behind the vertiginous fall in the ruble could not be explained by economic factors alone.

“The ruble’s worth reflects the worth of Putin’s rule in the eyes of the market,” said political observer Yulia Latynina.

“You can fool a voter but you cannot fool the markets.”

Putin, who has repeatedly dismissed economic trouble as temporary, remained conspicuously silent on Tuesday as Russians rushed to convert their savings, even leading some bank webpages to crash.

His spokesman Dmitry Peskov chalked up the economic turbulence to “emotions and speculative sentiment” and referred all questions to the government.

Foreign Minister Sergei Lavrov for his part said he had “very serious reasons” to think Western sanctions were an attempt to force regime change in Moscow.

The collapse of the ruble reflects what many economists call a crisis of confidence in the Russian economy amid Putin’s confrontation with the West and his unwillingness to change tack over Ukraine.

“The government obviously is not keeping up with the negative consequences of political decisions,” said Nikolai Petrov, a professor at the Moscow-based Higher School of Economics.

“It is important not to allow the panic to spread among people.”

Konstantin Kalachev, head of the Political Expert Group think tank, said Russians’ deteriorating living standards would deliver a body blow to Putin, whose approval ratings have been sky-high following a patriotic surge after the seizure of the Crimea region from Ukraine in March.

“A collapse of Putin’s ratings in 2015 is unavoidable,” he said.

While many Russians say the impact of the ruble collapse has yet to sink in, others said they are in a state of shock.

“The economic situation of the past few months has been worrisome and stressful. But what happened yesterday is a catastrophe,” Saint Petersburg resident Yulia Kirillova, 43, told AFP.

“I did not sleep last night, thinking about what to do. My business is on its deathbed. Yesterday’s drop has shown that the situation is deteriorating, that it’s unclear what to expect and there’s no bottom.”

Even without the Ukraine tensions and sanctions eating into support for the ruble, the fall of global energy prices is worrying for a country which takes half its revenues from oil and gas exports.

“The final step for the perfect storm would be the introduction of capital controls.”

‘Between bad and worse’

The head of the Russian Central Bank Elvira Nabiullina tried to put a brave face on events, claiming the currency was undervalued.

The bank’s first deputy chairman Sergei Shvetsov said later in the day that the situation was “critical” and the bank would soon take additional measures.

“Trust me, the choice the central bank’s board of directors made was one between bad and much, much worse,” he said of the controversial decision to hike the rate by 6.5 percentage points.

Ulyukayev said the move came a little too late but hoped that the new measures to stabilise the foreign exchange market would help.

Respected former finance minister Alexei Kudrin approved the move but said on Twitter that the Russian government should now adopt measures to help win back the trust of investors.

But Russia’s business ombudsman Boris Titov said it did not make sense to save the ruble at the expense of the entire economy.