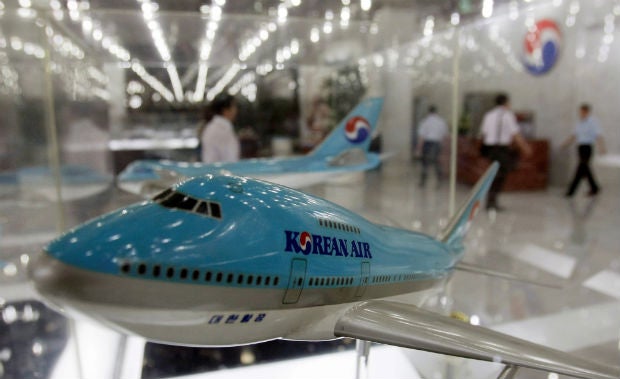 In this Aug. 14, 2009 file photo, customers walk near the model planes of Korean Air in a showroom at the headquarters of Korean Air Lines Co. in Seoul, South Korea. AP

SEOUL, South Korea – South Korea said on Tuesday it could fine Korean Air up to $2 million after the daughter of its chief executive delayed a flight by throwing a tantrum over some nuts.

Cho Hyun-Ah, a former senior executive with the flag carrier, forced the chief cabin crew member off a New York-Seoul flight after she took exception to being served macadamia nuts she had not asked for — and in a bag, not a bowl.

“We will file formal complaints with the prosecution against Cho Hyun-Ah today” and ask them to open a criminal investigation, the transportation ministry said in a statement.

Korean Air will also face either a flight ban of up to a month on an unspecified route or a fine of up to $2 million, it added.

A ministry investigation found that 40-year-old Cho screamed and hurled abuses at a flight attendant and the chief purser during the incident on December 5, in a case which has sparked a wave of public anger in South Korea.

State prosecutors are also investigating unconfirmed allegations that Cho used violence against cabin manager Park Chang-Jin, including his claims that she pushed him into the cockpit door and jabbed him with a service manual.

Cho has denied reports she also made him and the flight attendant kneel and beg her forgiveness, but another passenger in first class confirmed most of Park’s account and said she forced both to their knees.

She publicly apologized and resigned from all her posts at the family-run business conglomerate Hanjin Group, which owns Korean Air, in the face of intense public uproar.

Korean Air chief executive Cho Yang-Ho apologized publicly over his daughter’s “foolish act” and suggested he should share some of the blame for not bringing her up correctly.

Sales of macadamias soar in Korea after nut rage