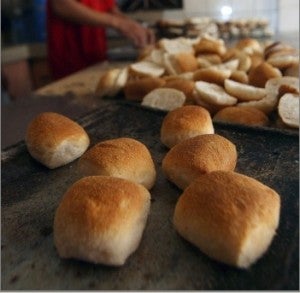 MANILA, Philippines—The Department of Trade and Industry assured the public, on Thursday, about the stability of the supply of Noche Buena (Christmas food) items throughout the holidays, but admitted that there has been a slight upward pressure on prices due to the port congestion in Manila.

Trade Secretary Gregory L. Domingo was quick to note that this “pressure” should be “nothing to worry about,” amid claims made earlier by groups that the port congestion would significantly spike prices of consumer goods if left un-addressed.

In July, the Confederation of Truckers Association of the Philippines, among other groups, had warned that the expanded truck ban policy being implemented in Manila at that time, and the issuance of an order raising fines for colorum or unauthorized trucks (which has been suspended) would further worsen the port congestion, which in turn would jack up prices of goods.

A number of measures, however, have been implemented by the government since then, enabling the operations at the Port of Manila to normalize.

Domingo explained that the impact of port congestion on prices, while concrete, has been minimal at about 2- to 3-percent hike in prices, as port operations have begun to stabilize. These increases represented the impact of additional charges slapped by shipping lines, trucking firms, among others.

But the impact of these costs should already be reflected on the new suggested retail prices (SRP) list for Noche Buena products issued by the DTI in October. The retailers, however, have been feeling the pinch of squeezed margins given the additional logistics and transportation costs, Domingo further said.

Meanwhile, Trade Undersecretary Victorio Mario A. Dimagiba disclosed that they have been coordinating with the producers of Pinoy Tasty and Pinoy Pandesal for another round of price reductions for these bread products before Christmas.

The price of Pinoy Tasty already went down by 50 centavos to P36.50 a loaf effective Nov. 7, while the price of Pinoy Pandesal was reduced by 25 centavos to P22.25 per 10-piece pack. These reductions were due to a decrease in the cost of Harinang Pinoy (Philippine Flour) in mid-October from P750 to P730 (per bag). This flour is used as a primary ingredient in making Pinoy Tasty and Pinoy Pandesal.

According to Dimagiba, the bread producers are amenable to further reduce the prices of Pinoy Tasty and Pinoy Pandesal by another 50 centavos and 25 centavos, respectively, if the price of flour used for these products go down by P30 to P700 a bag, from the current P730. Such reduction, if to be implemented, will further bring down the costs of Pinoy Tasty and Pinoy Pandesal to P36 and P22, respectively.

In another development, the DTI rolled out on Thursday its holiday edition of the Diskwento Caravan (Discount Caravan), a flagship project of the agency that offers up to 50 percent discount in basic goods and prime commodities.

Dimagiba led the opening of the three-day caravan in Makati City, which will be followed by a series of caravans to be held across the country until December 20. These will also sell Noche Buena products, Marikina-made shoes, Christmas lights, fireworks, and home appliances. For this three-day caravan in Makati alone, the DTI is expecting at least P1 million in sales, according to Dimagiba.