A first-class hotel rises in Samar 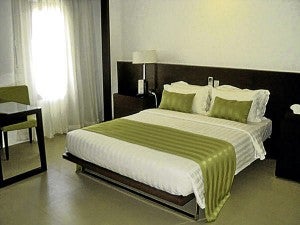 Rear portion of the hotel being developed into a resort (above); a single room at Ciriaco Hotel (right); hotel sales manager Rene Eufre shows the door signages, which are in Waray with English translations (far right).

But for a long time, it lacked one important thing for visitors: Accommodation.

Now, tourists can stay in a cozy place as they explore the country’s third largest island composed of the Samar, Northern Samar and Eastern Samar provinces.

Ciriaco Hotel and Resort, the only hotel of its kind in Samar, offers many amenities to the modern tourists – from fine dining to high-speed Internet access in guest rooms.

The de luxe hotel is located along the Maharlika Highway in Barangay Bagacay in Calbayog City, just 2 kilometers from the airport, where flights to and from Manila are available.

Tacloban City, another flight end-point from Cebu City and Manila, can be reached in three and a half hours by land travel from the hotel. 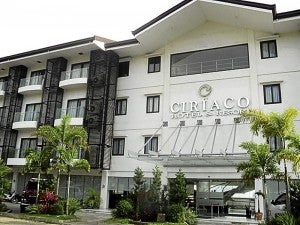 The frontage of the Hotel Ciriaco Hotel and Resort.

“We have complete facilities for tourists and locals,” says Rene C. Eufre, the sales manager.

Other amenities are laundry and pressing services, personalized wake-up calls and a money exchange service.

Most of the guests are walk-in customers and those from the government, associations, schools, pharmaceuticals and manufacturing firms, Eufre says.

At present, the hotel is developing a resort at a reclaimed area in the rear, equipped with swimming pools, a spa and a gymnasium.

“We’re targeting [to open the area by] December in preparation for the next summer,” he says.

He expressed optimism that many more customers will come because of the water sport facilities, like jet skiing, kayaking and water rides. 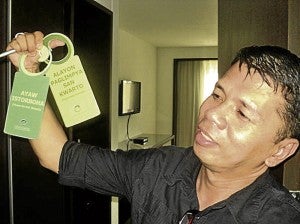 “I need an aggressive tourism right now because there are a lot of natural resources here; maybe we can market [the hotel] to travel agencies,” he says.

He plans to have a tour package to Samar and Northern Samar, such as hopping to the three island municipalities facing Calbayog City and to the nearby Balicuatro Islands.

Other possible itineraries include several waterfalls in Calbayog and to the Samar Island Natural Park, where tourists can do mountain trekking and extreme boat riding.

Hotel owner Ciriaco “Tony” Uy Tan, who has been successful in the motorcycle and cinema businesses, says he is happy that he is helping Samar’s tourism industry.

A first-timer in this kind of business, Tan reveals that he was encouraged by the city mayor and the congressman to put up a big hotel in Calbayog to cater mainly to foreign and local tourists.