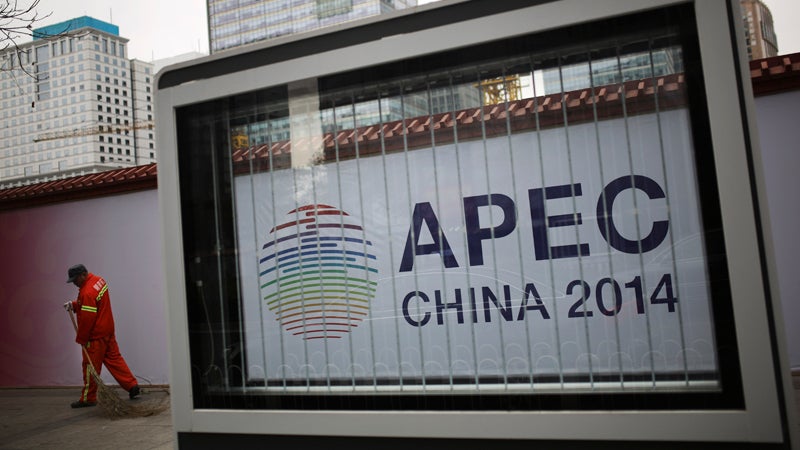 A cleaner swept a pavement near a APEC China 2014 logo on display near a construction site at the Central Business District in Beijing, China Tuesday, Nov. 11, 2014. Chinese President Xi Jinping called on Asia-Pacific leaders Tuesday to strengthen trade ties at a summit Beijing is using to boost its role as a regional power with a flurry of trade and finance pacts. (AP Photo/Andy Wong)

HUAIROU, China—Leaders of Asia-Pacific economies agreed on Tuesday to begin work toward possible adoption of a free-trade pact proposed by China, the Chinese president announced, giving Beijing a victory in its push for a bigger role in making trade policy.

After a two-day Asia-Pacific Economic Cooperation (Apec) summit, leaders agreed to launch a two-year study of the initiative, President Xi Jinping said at a news conference. Xi, the meeting’s host, called the decision by leaders including US President Barack Obama and Russia’s Vladimir Putin a “historic step.”

China is promoting the proposed Free Trade Area of the Asia-Pacific (FTAAP) despite US pressure to wrap up other trade negotiations. Analysts see it as a response to a US-led initiative, the Trans-Pacific Partnership (TPP), which includes 12 countries but excludes China.

Beijing has launched a series of trade and finance initiatives in pursuit of a bigger role in US-dominated economic and security organizations to reflect Beijing’s status as the world’s second-biggest economy.

Apec was the first major international gathering in China since Xi took power. The presence of world leaders gave Beijing a platform to lobby for a bigger leadership role.

“Regional economic integration is the long-term driving force for growth in the Asia-Pacific region,” Xi said.

On the eve of the gathering, Beijing announced a free-trade agreement with South Korea. Also on Monday, regulators approved a plan to open Chinese stock markets wider to foreign investors by linking exchanges in Hong Kong and Shanghai. That followed the weekend announcement of a $40-billion Chinese-financed fund to improve trade links between Asian economies.

Earlier this year, Beijing launched a regional development bank with 20 other governments. In May, Xi called for a new Asian structure for security cooperation based on a group that includes Russia and Iran but excludes the United States.

China says its motives are benign. But its growing economic weight as the top trading partner for most of its neighbors from South Korea to Australia could erode US influence.

In an effort to appear more open, organizers took the unusual step of allowing access from the press center to websites such as Facebook, Twitter and YouTube that usually are blocked by China’s extensive Internet filters.

The Asia-Pacific trade pact was first proposed by an Apec business panel but China has taken the lead in promoting it.

Obama on Monday said the United States “welcomes the rise” of a prosperous, peaceful and stable China. Still, American officials chafe at Beijing’s insistence on promoting the Free Trade Area of the Asia-Pacific.

US trade officials say the two proposals are not competitors. But they want Beijing to wrap up a US-Chinese investment treaty and a separate agreement to lower barriers to trade in information technology. Washington and some other governments argued the Chinese proposal would be a distraction at Apec but Beijing made it the centerpiece of the meeting.

Few details of the US-led proposal have been released but promoters say it would reduce or eliminate tariffs on most goods among the member countries. That might hurt China by encouraging member countries to trade more with each other.

Leaders of the nations involved in TPP talks, including the United States, Mexico, Japan and Australia, met Monday and issued a statement saying they were making progress. The talks have been delayed repeatedly by disputes over the sweeping nature of its market-opening proposals.

“We have instructed our ministers and negotiators to make concluding this agreement a top priority,” the statement said.

The initiative promoted by Beijing is less ambitious and is aimed at reducing conflict among overlapping trade agreements between pairs of Asia-Pacific economies.

It is a logical response to being excluded from the TPP, said Li Wei, an economist at the Cheung Kong Graduate School of Business in Beijing.

“If the US doesn’t want China to join the TPP, then China can form its own trade groups,” Li said.

Li also pointed to limits on access to US markets for some Chinese technology companies such as Huawei Technologies Ltd., a maker of network switching gear, on security grounds.

“The world, with the US leading, is retreating from free trade. It is moving into protectionism,” said Li. “If the US is saying, ‘I should be careful about who I have free trade with,’ then China should take a more liberalizing role.”

Your subscription could not be saved. Please try again.
Your subscription has been successful.
Read Next
US firm to beef up back office workforce in PH
EDITORS' PICK
Fuel price rollback expected on Feb 7
Makabayan bloc blasts bid to expand US access to more military bases in PH
House energy committee chair Arroyo bats for cheap electricity
Omega Speedmaster super racing: Tiny device massive change
vivo Philippines offers a free bouquet of flowers and a premium necklace perfect for Valentine’s Day
Philippine-United States alliance ‘rock solid’ — DFA
MOST READ
Vice Ganda gets called out for ‘unfair treatment’ of ‘It’s Showtime’ co-host Karylle
Fuel price rollback expected on Feb 7
Kris Aquino gets ‘renewed confidence’ after consultation with new doctor: ‘I have a strong chance of getting better’
Pido Jarencio back as UST Growling Tigers coach
Don't miss out on the latest news and information.